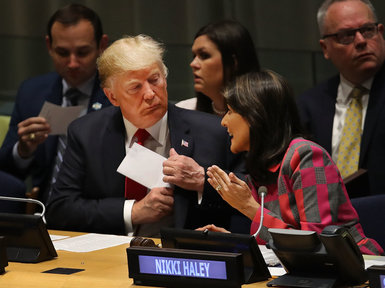 "Trump's motorcade arrived during Moreno's speech at the UN headquarters in New York.
The White House did not immediately explain why Trump was running late. Trump's America-first policies and criticism of allies has clashed with the multilateral spirit of the UN General Assembly.
The U.S. president arrived to New York over the weekend and began holding meetings with world leaders on the sidelines of the UN gathering on Monday.
He met with French President Emmanuel Macron and Egyptian President Abdel-Fattah al-Sissi of Egypt, as well as with the president of South Korea. He is scheduled to meet Prime Minister Benjamin Netanyahu later this week.
Tuesday morning, three hours before his speech, Trump tweeted that he does not intend to meet with Iranian President Hassan Rohani, who is also in New York this week. “Despite requests, I have no plans to meet Iranian President Hassan Rohani. Maybe someday in the future. I am sure he is an absolutely lovely man,” Trump wrote.
The Trump administration has recently increased its economic pressure on Iran. Last week, Trump’s personal attorney, Rudy Giuliani, said the administration is aiming to bring down the Iranian regime and replace it with another form of government. Administration officials such as UN Ambassador Nikki Haley refuted the comments and said this was not the true intention of Trump’s Iran policy."

Read the article in Ha'aertz here.

If you read the article you see that punishing Iran appears to be more important for this US government than solving the humanitarian crisis in Syria.

A war against Iran is the last thing the world needs. But the policy of this government: you don't need it therefore you get it.