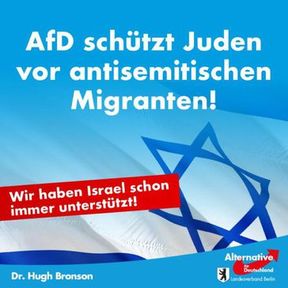 Ian Buruma on Jews and nativism:

'What is unusual is to be Jewish and a nativist (at least outside Israel). The Frankfurter Allgemeine Zeitung reported recently that a number of Jews had joined the anti-immigrant Alternative für Deutschland (AfD) party. Many of them seem to be of Russian descent. An exaggerated fear that Muslims are about to destroy the West appears to be their main motive for joining the far right. Miller is haunted by a similar apocalyptic vision. And there are others of this ilk: the casino magnate and major Trump supporter Sheldon Adelson, for example.

But there are sound reasons why Jews in the diaspora normally do not become nativists. Nativist movements that insist on the special privileges of blood and soil have invariably been bad for minorities, especially Jews, leading to the kind of violence that drove Miller’s great-grandparents out of their country.
Some people find it puzzling that anti-Semites have accused Jews of being either archetypal Bolshevists or archetypal capitalists. Historically, most Jews, living in poor villages, were neither. But the attraction of left-wing ideas for Jewish intellectuals is hardly mysterious. Karl Marx himself hoped that once the workers of the world united, ethnic and religious distinctions would cease to matter. And Voltaire, who was no great friend to the Jews, once remarked about the London stock exchange: “Here Jew, Mohammedan, and Christian deal with each other as though they were all of the same faith, and only apply the word infidel to people who go bankrupt...” Capitalism, as we know, transcends borders.'

Indeed, one of the reasons why nativists quite often act as if they despise capitalism is because it transcends borders. And the special privileges of blood and soil are in the end bad for everybody.