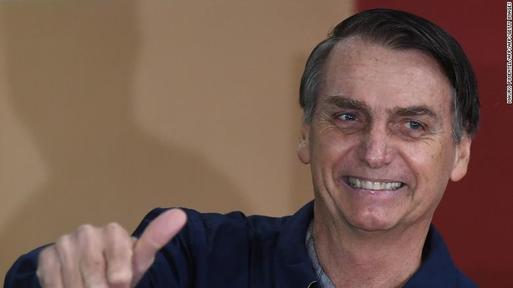 Vincent Bevins on a looming dictatorship in Brazil:

'Over the next two years, as crime worsened and Brazilians watched Temer, an extremely unpopular president of very questionable legitimacy, roll back workers’ rights yet fail to restart the economy, support for the return of military rule shot up. And why not? If you were rich and stayed in line politically, things were never that bad—this kind of nostalgia was often reproduced in media and historical memory. Brazilian democracy has enjoyed only a few decades, and according to the folk memory of the dictatorship, there was far less of the corruption that many believe plagues Brazil today. One reason for the dictatorship’s unmerited reputation for clamping down on corruption is that it did clamp down on reports of corruption: in one case, when a diplomat announced he would publish a book about graft under the military government, the regime kidnapped, tortured, and murdered him.

“It’s really strange that so many people now believe that the military regime somehow delivered safety to Brazilians or managed the economy well, since, by the end of the 1970s, they were very often seen as corrupt and incompetent, and crime statistics were worsening due to the government’s own policies,” said Marcos Napolitano, a historian at the University of São Paulo and an expert on the dictatorship. His research has shown that by encouraging mass migration into urban slums with no public services, and allowing a militarized police to routinely use extra-judicial killings to control marginalized populations, the dictatorship actually set the country on the path toward its current widespread violence. The security services turned the logic of extermination they had used to eliminate the left opposition against the urban poor, and waged a low-level war that has never ended. Napolitano added:

It’s clear the way that Brazil transitioned into democracy has allowed for the return of politicians praising the military regime. There was no effective investigation into the crimes committed by the state, while instead there was a process and negotiation and reconciliation that allowed society at large to avoid a real discussion of what happened. And now there are some political elements that really remind us of the past. There’s a bitter middle-class resentment against the left, including parts of the left that aren’t even socialist.

Bolsonaro has never apologized for any of the incendiary positions he took over the decades. But he did moderate his tone slightly during this year’s campaign, after a late conversion to free-market economics that won him the support of international investors. Bolsonaro’s campaign slogan—“Brazil above all, God above everyone”—more or less explicitly recalled the patriotic, pro-family language of pre-1964 coup protests against Jango by hardline conservatives. By the time Brazilians voted last Sunday, some moderates were so fed up with the other options that they found ways to wave aside what Bolsonaro has actually said he wants to do.

“I voted for the PT [Workers’ Party] before, but we’re so tired of them,” said Bolsonaro supporter Carla Silva, a forty-five-year-old white acupuncturist at a voting center in an upper-middle-class neighborhood in São Paulo. When I asked if she considered him dangerous, she responded: “Oh, I am totally against his plan to give everyone guns, and what he has said in support of beating LGBT people. For the love of God, I’m against his rhetoric. But he won’t be governing alone, and he won’t be able to do everything he wants.”

Then there are those who appear to be fully behind Bolsonarismo. As Silva finished speaking, a young father and son walked out of the polling booth. The boy, maybe seven or eight years old, was carrying a giant toy rifle. In today’s Brazil, that is a clear family endorsement of Bolsonaro’s proposal to arm civilians and order police to shoot to kill criminals. Almost everyone I spoke to that day said they supported Bolsonaro. Some shouted it at me angrily and proudly, as if they knew that it was a transgressive thing to say, but they were going to do it anyway.

Some Brazilian friends told me the other day that the Brazilian people have the choice between corruption with fascism or corruption without fascism, the choice should not be that difficult. (After all, corruption doesn't have to be that bad.) But as Victor Bevins' article makes clear, the longing to put an end to violence in the big cities drives people to support extreme parties and movements. Remember Afghanistan, it was the sheer anarchy and the spread of wanton violence in the 90's that made quite a few Afghans support the Taliban.

The winning streak of semi and less semi totalitarianism hasn't ended yet.