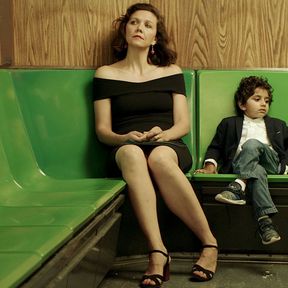 A kindergarten teacher, Lisa, falls in love with a little boy in her class, or rather with his talent, he turn out to be a poet, a young Mozart. She herself takes a poetry class in the evening, but her own poetry is rather dull.
That's the story of Sara Colangelo's move "The Kindergarten Teacher" with Maggie Gyllenhaal and Gael García Bernal among others. "The kindergarten Teacher" is a remake of an Israeli movie with the same title by Nadav Lapid, which I haven't seen.
What's so interesting and disturbing about Colangelo's movie is not only the performance by Maggie Gyllenhaal, rightly praised in the NYT, but also the portrayal of love, care and nurture as a rather selfish obsession.
Nevertheless, towards the end of the movie you root wholeheartedly for the kindergarten teacher, even despite strange inconsistencies like a bathroom door that can be locked from outside in a motel, which I've never seen, but it is not that important, and then there is the poetry of the 5-year-old boy, which stretches the suspension of disbelief a bit too far, is a young kid really capable of this? I thought the boy would be exposed as a plagiarist, and why would a five-year-old become a plagiarist? Perhaps it's all Lisa's imagination, perhaps it's even her own poetry.
All these questions and thoughts turn out to be of lesser importance when the movie reaches its climax.
You look for meaning, maybe even love, what's the difference, and when you've finally found meaning self-preservation turns out to be rather dull and useless, that's what The Kindergarten Teacher is telling us.