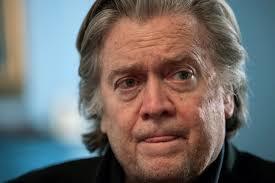 'Early in the morning, before he grabs for his three cell phones, Stephen Bannon sits in a brown, leather armchair in his bedroom and meditates. Twenty minutes of silence followed by an examination of what lies ahead for the day - and then a bit of what he calls divine reading. Currently, he is focusing on the history of the Catholic Church. He says the routine helps him avoid going completely crazy. Or, in Bannon's own voice: "Without meditating I would go fucking insane."

He sinks into the armchair next to the bed like a tired gorilla. Gray stubble, stringy hair, red nose, gaping pores. At first glance, one might think that he had a bit too much Rioja the night before, but his only visitors were a couple of people from the White House who stayed late. He slept two, three hours, then an idea, a message, a thought jerked him out of bed, as is so often the case. Bannon doesn't drink alcohol, only water, coffee and Red Bull.

His bedroom is that of someone who views his life in the context of history, someone who is obsessed with battles and fights, and who surrounds himself with violence, death, adrenaline, importance. On his bedside table are books about Adolf Hitler and World War II, next to the bleached jawbone of an alligator an acquaintance sent him from Florida.'

'"I am fascinated by figures like Genghis Khan, Napoleon or Lord Nelson," he says. "Now that I'm involved, I feel in history you can see individuals have a big impact. The thing that always amazed me about Hitler is how a guy like him, a bum from Vienna who was so out of the loop, could rise to power in Germany."

Genghis Khan, Napoleon, Hitler. Such are the characters who dominate the Bannonian world. Indeed, one hardly even needs to leave this bedroom to explain the man.'

Never underestimate your enemy, but Mr. Bannnon may be too much of an anachronism to arouse emotions in masses. On the other hand, we are living in the era of the anachronism, old fashioned war enthusiasm may make a comeback as well.