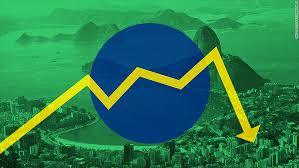 'What really did Brazil’s economy in, however, was the way it responded to these shocks: with fiscal and monetary policy that made things much worse.

On the fiscal side: Brazil has big long-term solvency problems. But these require long-term solutions. What happened instead was that the Roussef government decided to impose sharp spending cuts in the middle of a slump. What were they thinking? Incredibly, it seems that they bought into the doctrine of expansionary austerity.

And on top of that, monetary policy also turned sharply contractionary, with a big rise in interest rates (Figure 3). What was that about?'

Bad plumbers would go out of business soon. Imagine a plumber would not unclog your clogged toilet but make it worse. Excrements all over your living room.
But politicians who worsen a crisis can get reelected. Democracy as a market - democracy is a market - is a moderate failure.