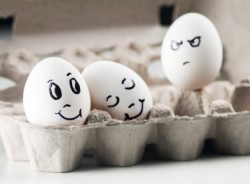 David Brooks suggests that nationalism is the enemy of excellence.
Well, thanks to Anne Appleblaum, he is right to believe that nationalism, resentment, populism, whatever you want to name it, are an attempt to exclude certain groups from competing. (Jews won't replace us.)

How do we define fair competition?

A woman told me that her career was sabotaged by men.

One could indeed say that for members certain minority groups fair competition is an ideal out of reach, hence positive discrimination.

But could a young man who stutters claim that he not able to compete fairly with others because of his stuttering?

If we agree that equality of opportunity is desirable but that this doesn't mean that we will have equality of outcome we might conclude that there was, is, and will always be resentment.

Probably we should take the resentment as a given and then look for ways to make it as least dangerous as possible.

The question remains where the fight against injustice ends and the resentment begins.