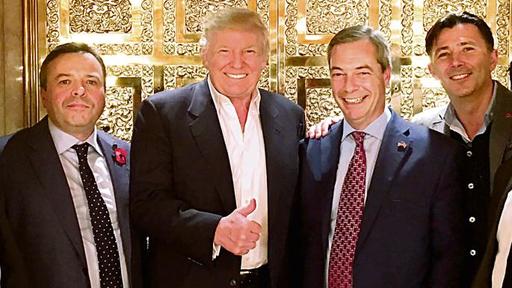 On Brexit, Trump, the UK, the US, Cambridge Analytica, Facebook and Bannon, among other things - Carole Cadwalladr in NYRB:

'But the most vital questions have not yet even started to be answered. What is Nigel Farage’s relationship to Donald Trump? How might that connect to Russian interference in Anglo-American politics and elections? And, crucially, why is the British government silent on these matters? Why has it refused to answer parliamentary questions on these issues? Why is it ignoring senior politicians’ calls for a wider public inquiry?

Britain and America, Brexit and Trump, are inextricably entwined. By Nigel Farage. By Cambridge Analytica. By Steve Bannon. By the Russian ambassador to London, Alexander Yakovenko, who has been identified by Special Counsel Robert Mueller as a conduit between the Trump campaign and the Kremlin. The same questions that dog the US election dog ours, too.'

'London: the city that Bill Browder, the US-born British businessman who has been pursuing a global Magnitsky Act, says is irredeemably polluted by Russian money. Among London’s Russian “residents” is the sanctioned Russian businessman Oleg Deripaska—just one of a whole class of oligarchs who’ve mixed with British politicians and donated to British politics and who are now in Robert Mueller’s sights as an associate of Paul Manafort, the Special Counsel’s leading conviction so far; just last week, Deripaska was revealed to have been shuttling Konstantin Kliminik, a suspected Russian intelligence agent, also charged by Mueller, around the world in his jet.

It was in London, too, that the voter data of some 230 million US citizens was processed by Cambridge Analytica. In March, its servers were seized in a high-profile raid by the Information Commissioner’s Office, which is now co-operating with the FBI. And in London that “Organisation 1” is based—the name the Mueller investigation has apparently given Wikileaks in its explanation of the Russian military intelligence operation to subvert the US presidential election.

We know that the release of the Clinton campaign’s emails was a defining moment in changing the course of the election. We know Mueller is following the data trail for evidence of coordination between the Trump campaign and Russian disinformation. And we know he’s circling Assange’s contacts: Roger Stone, Jerome Corsi, and Ted Malloch, another friend and associate of Nigel Farage, are all pieces of the puzzle. We know that American intelligence must be working with British intelligence on this. On the movements in and out of the Ecuadoran embassy. On the movements in and out of the Russian embassy, as detailed in the first indictment. We know that Mueller has talked, repeatedly, to Bannon. We know that he is asking questions about Farage.

Yet the implications for Britain of Mueller’s indictments have barely been reported, let alone understood, in the UK. Theresa May must have been briefed on all this. She knows. She’s just not telling.'

'Critically, it’s what happened on Facebook that remains the biggest question of all. The control of money spent during elections is the very basis of our electoral laws. But they no longer work. Facebook has become a giant funnel not just for dark ads, but for dark money that evades election finance laws. It is now not in doubt that Facebook facilitated data crimes, what we’ve failed to reckon with is how it has broken our democracy, too.

Five times, a parliamentary committee has asked Mark Zuckerberg to answer its questions. And five times, Zuckerberg has refused. In the last instance, he said no to five national assemblies, when, in an unprecedented act, the British Parliament joined forces with counterparts in Canada, Australia, Argentina, and Ireland to invite Facebook’s chief executive to an extraordinary joint international committee on November 27. It’s often said that Facebook is more powerful than a nation-state. It’s not; it’s more powerful than five nation-states.'

We should not relieve the voters of their responsibilities, but it appears that the same team that brought us Trump brought us Brexit.

Who knows what else they will bring us.

And at the same time May, who is in the know, gives us a Brexit that is not really a Brexit, we should call it desperate control damage.

Democracy by dice may be better than democracy by and for the people. The question remains: what kind of questions are we going to ask the dice, and who is defining these questions.