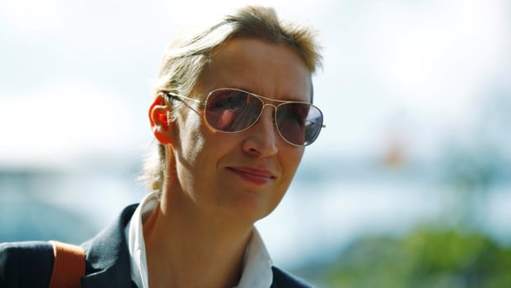 'Brigitte Hinger is extremely familiar with naturopathic treatments and yoga. Visitors to her website are greeted by the yoga teacher from the Lake Constance village of Markdorf standing in the "tree pose," standing on one leg with the palms of her hand pressed together over her head. The services she offers extend from auricular acupuncture to detoxification programs. Her motto: "Nature heals both body and soul."

But the 56-year-old also has another area of interest, one in which she isn't quite as knowledgeable. Hinger is the treasurer of the local chapter of the Alternative for Germany (AfD), the right-wing populist party that has been gaining support in the last several years. Since summer 2017, she has handled two huge donations totaling almost 300,000 euros -- the largest donations that any AfD chapter has ever received.

At least one of the donations was intended for Alice Weidel, the party's lead candidate in last year's national elections and today the AfD's co-floor leader in the Bundestag, Germany's parliament. But because the donations came from abroad via straw men and may have violated reporting requirements, the AfD finds itself facing possible fines in the hundreds of thousands of euros. The result has been a party scandal that reaches to the very top.

For Weidel, who is also a member of the AfD executive board, the affair could end up bringing her wildly successful political career to a premature end. In the last several days, she has lost the support of important allies, first and foremost Alexander Gauland, party co-leader and Weidel's partner in leading the parliamentary group. He is said to be furious at her tepid efforts at providing clarity in the scandal. Sources close to party leadership say tactical considerations are all that have prevented him from withdrawing his support completely.

For the party, the donation scandal is a catastrophe. Racist comments or other taboo violations from leading party officials hardly hurt the AfD at all. Indeed, many supporters gravitate to the party precisely because of its course discourse. A questionable support group whose anonymous benefactor forked over millions for posters and other AfD propaganda likewise didn't hurt the party's image among its supporters.

But the dubious donations contradict the AfD's self-drawn image as a fresh, uncorruptible power outside of the "system" of the "cartel parties." The party's platform states: "It is imperative to reform donation rules to make them stricter and immune to corruption." The party would also like to see corporate political donations to parties in the country banned. Now, one of the top leaders of this so-called "alternative" finds herself mired in an old-school financing scandal.'

'Furthermore, Weidel is gay, which has made it difficult to gain significant support within the party. But she hasn't needed that support so long as party leader Gauland stood by her. But the donation scandal appears to have irrevocably broken that bond. AfD sources say that Gauland screamed at her when he found out about the large donations, which Weidel had kept quiet, from elsewhere. Her behavior, Gauland allegedly said, "was deeply shoddy" and represented a "serious breach of loyalty." Apparently, senior party members even considered forcing Weidel to give up her party offices until the situation was resolved.

Thus far, though, Weidel has been saved by the fact that there isn't a clear replacement available. Were she to fall, the party would once again find itself consumed by a power struggle between competing wings.

The second donation was reported to the federal parliament by senior AfD official Hans-Holger Malcomess in an email sent at 10:28 p.m. last Tuesday. On Feb. 13, 2018, he reported, 150,000 euros landed in the account of Weidel's local chapter, this time as a single payment.

The sender was apparently a "Belgian foundation" called "Stichting Identiteit Europa," the AfD reported. But because the local chapter was unable to identify "either the identity of the donor or the purpose of the donation," the party reported, the money was sent back three months later.

By law, parties are required to report to German parliament all donations of over 50,000 euros immediately and not months later. But the mail from Malcomess reveals just how sloppy the party is when researching such donations. The foundation is not based in Belgium, but in Leidschendam-Voorburg in the Netherlands, an embarrassing mistake.'

Yes, racist comments and other taboo violations are helping (certain) people flock to the party.

I'm not even convinced that these relatively minor financial scandals will hurt the AfD, we know that the new school is the old school plus some racism, fascism and anti-Semitism.

The power struggle within the AfD is more dangerous to the party than those scandals that by the hard core supporters of the party will be perceived as fake news anyhow.