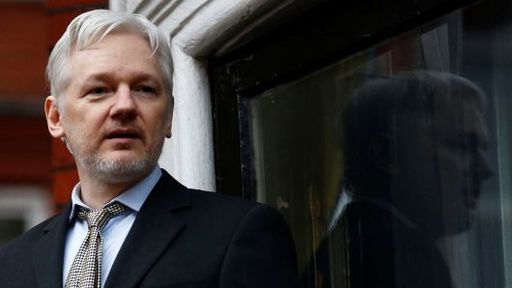 On Ecuador and Assange - Michael Sontheimer in Der Spiegel:

'The government in Quito has been providing Assange with political asylum since August 2012, but the relationship has recently soured and the Ecuadorian president would now like to see the Australian journalist leave the embassy sooner rather than later. In late March, Ecuadorian diplomats cut off Assange's internet connection and installed a jammer designed to prevent him from communicating with the outside world. Last month, the government issued new rules for dealing with their famous yet difficult guest.

When the fire extinguisher fell over that night, Assange bolted upright in bed and didn't know if the wind had pushed open the window or whether someone was trying to enter his room from outside. Was it mere paranoia? Assange has reason to fear intelligence agents kidnapping him and taking him to the U.S. In spring 2017, Mike Pompeo -- who has since been appointed secretary of state by U.S. President Donald Trump -- described WikiLeaks as a "non-state hostile intelligence service."

Even since it has been confirmed that at least a draft of an indictment against Assange exists, indications have also been mounting that a secret extradition request may already have been prepared and delivered to the U.S. Embassy in London. The British authorities, for their part, would likely arrest him immediately as soon as he set foot outside the Ecuadorian Embassy. Scotland Yard accuses him of having skipped bail, a violation that carries the possibility of up to a year in prison.'

'Even prior to that, in February 2016, the UN Working Group on Arbitrary Detention issued a statement in which it argued that Assange's stay in the embassy was a case of "unlawful detainment." The British government, reflecting its own unique brand of arrogance, blasted the statement as "ridiculous."'

'Assange refused to sign the new protocols. He and his lawyer are concerned that if he or a visitor were to violate any of them, it would give Ecuador an excuse to withdraw his asylum status and throw him out of the embassy. Assange's lawyer filed a complaint in Quito arguing that the new rules, which the Ecuadorian Foreign Ministry decided would take effect on Nov. 9, violated Assange's basic asylum rights. A judge ruled in the government's favor at the end of October.

Some of the protocols also pertain to Assange's behavior within the embassy. He was, for example, requested to take responsibility for the "well-being, food, hygiene and proper care" of his pet. The reference is to the cat that he refers to as the "embassy cat," which was given to him by his children. The rules note that if Assange doesn't tend to the cat properly, it will be given away.

WikiLeaks Editor-in-Chief Kristinn Hrafnsson was able to visit Assange last week. The Icelandic journalist brought no electronic devices with him and described the atmosphere in the embassy as "very hostile." He also said the new rules for visitors were being enforced arbitrarily and that evening and weekend visits were no longer permitted. "They want to break Julian," Hrafnsson said. "They want to destroy him."'

I'm afraid that Mr. Assange himself used to enjoy his own brand of arrogance, but now it's hard - despite everything - not to feel pity for him.