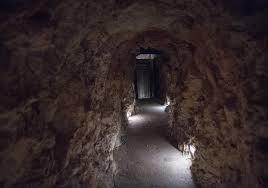 And now more on tunnels, Amos Harel in Ha'aretz:

'In an article published in the Israel Defense Forces journal Maarachot in June 2014, Military Intelligence officers described the changes made to Hezbollah’s plans. When the organization’s leader, Sheikh Hassan Nasrallah, first threatened to “conquer the Galilee,” it was an idle threat. Hezbollah and its Iranian masters know they cannot vanquish the IDF or drive it out of significant parts of the Galilee.
That’s not the plan. The plan is to launch a war with a surprise attack, in which commando forces will cross the border and take control of remote communities or military positions for a limited period of time while targeting the reinforcements the army will surely deploy. The plan has since become more sophisticated, incorporating lessons learned by Hamas in Operation Protective Edge in the Gaza Strip as well as the relatively complex offensive operations carried out by Hezbollah militants in the Syrian civil war.
The tunnels were supposed to allow companies from Hezbollah’s Radwan special forces unit enter Israel undetected. The tunnel that was uncovered outside Metula is shorter and shallower than the ones the IDF has found in the south, but even so it could have brought dozens of militants into Israel quickly. From there, they were to spread out, take key positions and begin employing snipers and anti-tank missiles against the IDF.
Immediately after the shock troops invaded Israeli territory using the tunnels, as their assault was detected, more forces would breach the border fence. Metula is a desirable target to Hezbollah, accessible only by a single, relatively steep road.
At the same time, according to assessments, additional companies of militants were to use other tunnels to enter Israel before spreading out and occupying strategic points along the ridges south of the border, in an effort to stop Israeli troops from advancing northward.'

'In the weeks to come, Israel plans to leverage the discovery of the tunnels for diplomatic gains, as it did with the tunnels dug under the Gaza border by Hamas.
Netanyahu will turn the site outside Metula into a “model tunnel,” inviting diplomats from around the world to observe Hezbollah’s offensive intentions in person. The exposure of the tunnels is a stage in a protracted Israel war against Iran and Hezbollah. All the signs suggest that all the combatants plan to continue to clash next year, too.'

For the moment quiet on the northern front, that's what this article tells us.
Quiet is another word for preparing for war.

In too many countries playing with war is besides everything else a manoeuvre to win the elections.