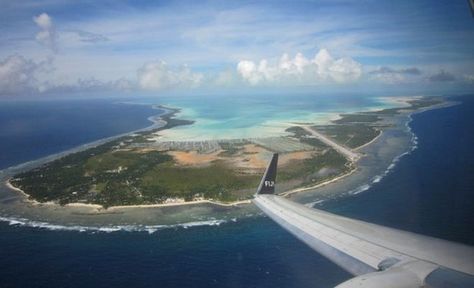 'Ioane Teitiota -- this citizen of one of the flattest and most remote countries on Earth, one that could hardly be located any further from the scientists in Potsdam -- has a plan. He wants the world to know what is coming its way. Not just the flooding, but also the people and nations that will be forced to flee from climate change.

From his bamboo hut, Teitiota has sued the United Nations. He is seeking to become the first person ever to be declared a climate refugee.

He has sought asylum in New Zealand and is now seeking it worldwide because it is becoming difficult to live in his homeland, with the sea now seeping into the groundwater and the only things hanging from the palm trees are dead leaves.

Thus far, the people fleeing from Kiribati have not been recognized as refugees by any country in the world. The Geneva Conventions offers protection only to those who are persecuted on the grounds of their race, religion, nationality or political convictions. The Supreme Court of New Zealand ultimately ruled that none of those things apply in Teitiota's case.

But Teitiota refuses to give up. He wants the UN to amend its 1951 convention to include the term "climate refugee." He knows full well that his case, focusing as it does on a major issue to which no country in the world has provided a binding answer, is running up against a legal loophole in international law. Yet it is a question that will only become more pressing in the future: Do people fleeing from droughts or floods have the same right to protection as those escaping wars or persecution?

At the 2017 UN World Climate Conference in Bonn, where Kiribati's former president also spoke, UN experts estimated that 20 million people are already fleeing heat, drought, storms or floods. A World Bank study has warned that this figure could reach more than 140 million by 2050.

They are the inhabitants of the islands in the Pacific -- Kiribati, Tuvalu, Samoa, Nauru, the Solomon Islands and the Marshall Islands -- who contribute the least to global warming and yet their lives are already threatened by increasingly violent cyclones.

Just like the inhabitants of the three atoll settlements London, Paris and Poland. They fled to South Tarawa like tens of thousands of others from all parts of the archipelago. The capital of Kiribati is already one of the most densely populated cities in the world. Close to 5,000 people live within one square kilometer, almost as many as in Hong Kong, only without running water or apartments in skyscrapers. The population of Kiribati is growing, even as the amount of inhabitable land is shrinking.

Three years ago, the government of Kiribati purchased 25 square kilometers of land on an island in Fiji, a distant neighbor, for the equivalent of 6.5 million euros. It's intended as land for refuge -- the kind of promised land Ioane Teitiota has been asking God for every day. The country is already using that land to cultivate grains and coconut palms to secure food supplies for its people. According to the country's plan, most inhabitants are to be resettled on the foreign island by 2040.

The name given by the Kiribati government for its emigration program is "migration with dignity," which the country's new president feels is nicer than the word "flight."

Teitiota is standing at his beach again in front of the wall of sandbags as the sun sets on the ocean's horizon. "There must be enough room someplace in the world," he says. The sea now lies calmly in front of him, as if it has been stretched until smooth. God willing, he says, he'd even go to Germany.'

One could even say the future is already here.