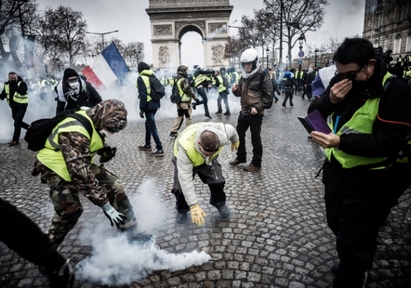 On the tide of globalization - Jeremy Harding in LRB:

"Chantal Mouffe has reassured the readers of Libération that the gilets jaunes are tending to the left, if they’re tending anywhere. But what left is that exactly? After Hollande’s dismal presidency and the collapse of the Parti Socaliste, only the Communist Party and La France Insoumise are left standing. What happens in the short term – tomorrow or Christmas – won’t tell us whether Mouffe is on the ball or just a wistful left-wing intellectual.
Two vigorous and influential figures in this fight want it to go the other way. As the cars are set ablaze tomorrow in Paris, Marine Le Pen and Steve Bannon will be watching eagerly from Brussels, where they’re scheduled to speak against the ‘Marrakech treaty’, a UN-inspired Global Compact for Migration. The document aims to manage human movement, as the driving factors – climate change included – push millions of people away from their countries of origin. The UN compact is non-binding: a member state can sign up to the idea, as France has done, without implementing the recommendations. But for Le Pen – and Bannon’s got her back – it’s the last nail in the coffin of national sovereignty. The gilets jaunes are still susceptible to this line of reasoning as they try to resist the tide of globalisation."

Left or right, resistance against the tide of globalization has been nothing but the awakening of the ghosts of the 20th century.

We are still waiting for really fresh ghosts.

Till that day I prefer globalization to yesterday's ghosts.