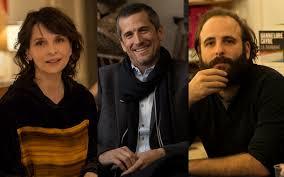 "Doubles vies", the latest Olivier Assayas movie, he also wrote the screenplay, is a strange hybrid: satire, comedy and bits of morality play.

The movie is set in the Parisian publishing scene, author, publisher, a publicist (with a lot of tattoos) and some of their significant others.
Much of the discussions about declining readership, e-books, novels that are not really novels but rather tiny disguised memoirs, seem to be dated and timeless at the same time.
The author is utterly unsexy and feeble, emotionally and intellectually, although a woman in the audience described him as a teddy bear.
The publisher's main asset is a fairly benign glibness and his wife, an actress (Juliette Binoche) longs to move back from doing tv series to the theater (Racine.)
What's most striking in the end is the lack of passion. The old Greeks believed that it was virtue to overcome your passions and your lust, it would make make you a better person. Here, the passions just peter out, what remains is a void.