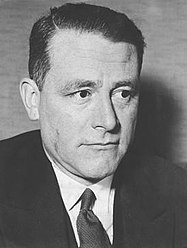 An evening on Carl Schmitt and a few other things in de Balie:

"The concept of humanity is an especially useful ideological instrument of imperialist expansion, and in its ethical-humanitarian form it is a specific vehicle of economic imperialism. Here one is reminded of a somewhat modified expression of Proudhon’s: whoever invokes humanity wants to cheat. To confiscate the word humanity, to invoke and monopolize such a term probably has certain incalculable effects, such as denying the enemy the quality of being human and declaring him to be an outlaw of humanity; and a war can thereby be driven to the most extreme inhumanity.” Carl Schmitt

Politician A. Rinnooy Kan - who had said that participating in this discussion was a sacrifice - defended humanity as a community, and pointed to the Nuremberg Trials in order to show that it was possible to invoke the old "humanity" without cheating. Whether the Nuremberg Trials are a convincing exemplar to show that we can speak about humanity as community is open to discussion.

Journalist W. Duk appeared to confuse facts and opinions and he defended the need for enemies, on different levels.