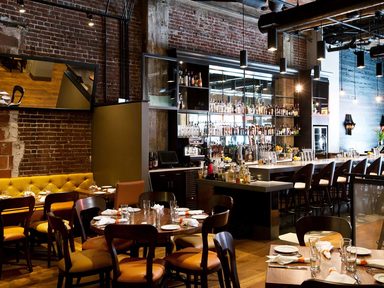 Dinner at the bar here in the Lucia Hotel. I was minding my own business, enjoying my halibut - pretty good - and reading an article about Alejandro Zambra when a bearded man grabbed the stool next to me. He was wearing shorts, whispered a few times "it's cold out there," and then he ordered deviled eggs, fried chicken and a cocktail.
He was probably in his thirties.
I continued minding my own business but he kept staring at me and I knew what was coming, a conversation. Believe me, I was not in the mood for a conversation, I wanted to be alone.
But the first sentence he uttered did surprise me. "I am fucking stoned and I am fucking dumb, are you as fucking stoned and fucking dumb as I am?"
I answered: "That's very well possible." And then I asked: "Are you from Portland?'"
"No," he said. "San Diego."
"What brings you to town?" I asked politely.
"Stupidity," he mumbled.
His deviled eggs arrived. He ate with his hands, he ate like a monster. I offered him my napkin, he took my napkin without saying a word. Then the threw it away. He cursed a few times.
When he was done with his deviled eggs he grabbed my shoulder and he said: "You are a fucking asshole, but don't worry, I'm a fucking asshole. I don't like fucking assholes. I can't stand fucking assholes."
"You are not a fucking asshole, you are a good man, you are a kind man," I said.
As far as I'm concerned this man was neither good nor kind but sometimes you have to lie in order to avoid a bar fight.
His fried chicken arrived. Again, he ate like a monster. When he was done he looked at me and he asked: "Where is my fucking napkin fucking asshole?"
I looked at the bartender, but it was clear that this bartender was not going to intervene. At best the bartender would call the police after I had lost most of my teeth.
So I said to the bartender: "The gentleman next to me is in desperate need of a napkin and could you bring me the check, please?"