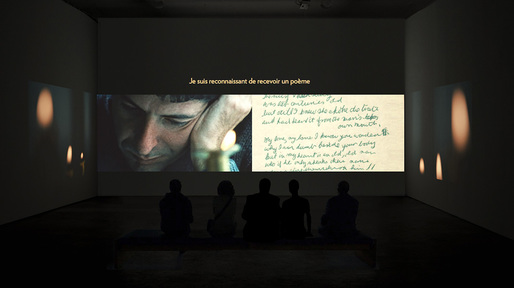 Sebastian Smee in WaPo on Leonard Cohen, the exhibition in the Jewish Museum and jacuzzi's:

'I love Leonard Cohen. Lines from his poems and song lyrics occasionally skitter through my brain. I even play a few of his songs on my guitar.

It’s true, his deep voice and monotonous melodies can begin to grate. But when you tire of Cohen’s music, there is still the idea of him — this dapper, doleful, ironic, gracious, anxious, reclusive, theatrical, seductive Jewish Canadian troubadour — to fall back on. It’s a tremendous tonic.

So I came to this show as many will come: to have my feelings rekindled, adjusted, enhanced.

Instead, I was plunged into a Jacuzzi of kitsch. I tried, in the spirit of Cohen’s own poetry, to feel free — “like a bird on the wire, like a drunk in a midnight choir” — but instead felt squeezed dry of all but secondhand sentiments, my best thoughts hijacked at every turn by a pantomime of feeling, a parody of catharsis.'

'Most of the art is video. Some of it is interactive. In one piece, Ari Folman’s “Depression Chamber,” you are cordially led, one at a time, into an antechamber, and from there into a crypt-like room. You lie on a sofa and see an image of yourself projected onto the ceiling. As Cohen’s “Famous Blue Raincoat” plays, the lyrics morph into symbols that swim across the walls and up to the ceiling, where they slowly form a shroud covering your image.

It sounds impressive, but it felt digital and tacky. When the dirge finally ended, I rose to my feet with relief.'

I went to the exhibition today and indeed, some of the criticism is valid, but a jacuzzi of kitsch seemed a bit harsh to me.

'Candice Breitz, an artist with a knack for taking singalong cliches and shifting them up a gear into something more interesting, has a video installation called “I’m Your Man (A Portrait of Leonard Cohen).” Breitz separately filmed 18 aging men passionately performing Cohen’s 1988 comeback track, “I’m Your Man,” in a recording studio. She also persuaded an all-male synagogue choir, from the Montreal congregation to which Cohen belonged, to sing its own arrangement of the album’s backing vocals a cappella.

There is comedy and not a little pathos in the sight of old hippies singing “I’m Your Man.” But the work feels more like a joke at their expense. And it’s missing the element that makes most jokes good: brevity.'

Candice Breitz' piece was much more than a joke at the expenses of the men participating, it was one of the interesting art works in he exhibition.

Yes, this exhibition is more like a collection of fan mail (one letter much better than the other) than a critical examination of Cohen's music and poetry, but sometimes you need a jacuzzi, whether it's kitsch or not.