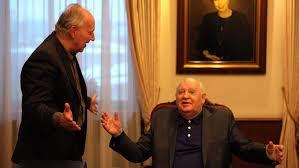 Ben Kenigsberg in NYT on "Meeting Gorbachev" -- Werner Herzog's documentary about the recent past and even more recent ghosts:

'Gorbachev pushes back at the notion that the Soviet Union’s end was somehow a triumph for the other side. “Americans thought they’d won the Cold War, and this went to their heads,” he says. “What victory? It was our joint victory. We all won.” Well, maybe not entirely — Vladimir V. Putin, pointedly absent from most of the film, is glimpsed in footage of Raisa Gorbachev’s funeral — but you come away from the movie agreeing with Herzog’s assessment, and yearning for Gorbachev’s brand of diplomacy.'

Gorbachev says that a friend had put on his tombstone: we tried.

It's a text with which Gorbachev could live as well.

Yes, we tried, some more than others.

"He who comes too late is punished by life," Gorbachev famously said.

Somehow, one has the feeling after watching this documentary that even if you don't come too late you are punished by life.