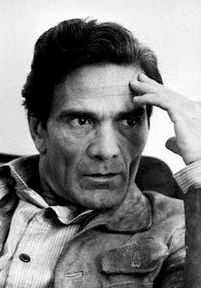 A small Pasolini-festival takes currently place at the Walter Reade Theatre.
Tonight I saw “Accattone”.
While seeing the first images of the movie I remembered that I had seen the movie a few years but I had fallen asleep after ten minutes.
“Accattone” is about a pimp and his friends who seem to despise work for good reasons. Work is for animals, as one of the character remarks.
The prostitutes are closer to housewives than to prostitutes according to today’s standards, which makes them fairly attractive.
Finally Accattone finds a woman he likes that much that he is willing to work a bit, instead of sending her out on the street. Shortly after an attempt to steal some salami Accatone dies and he is happy.
Although Accattone is not a very likeable character you feel sympathy for him.
Being a pimp can be a noble profession. As long as you do it with joie de vivre.