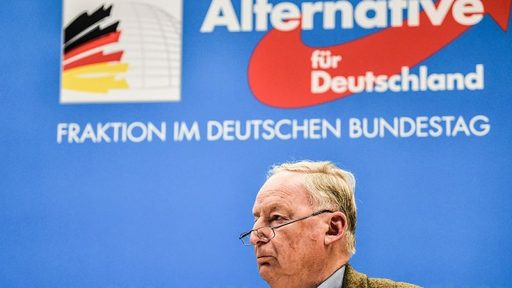 'Weidel began making overtures to the far-right wing about a year ago. Earlier, she been a declared opponent of Höcke, and had even tried to initiate proceedings to have him excluded from the party. But now she took the initiative and sought contact with Höcke through intermediaries. Since then, there have been several meetings, mostly in Berlin -- at times just with Höcke and his friend and mentor, the New Right publisher Kubitschek. And at times there have been slightly bigger meetings with people like Kubitschek's wife Ellen Kositza and AfD party head Gauland.

The fact that Kubitschek has been mediating is indicative of how serious the far-right wing is about gaining footing within the party mainstream. Höcke and Andreas Kalbitz, the 46-year-old from the eastern state of Brandenburg who is pulling the strings within the far-right wing, are closely associated with the publisher and follow his advice when coming up with their policies. Previously, he had tried to make it seem as though he had a slight distance from the party, but it is now clear that he both has and indeed wants to have influence on the party.

"Several meetings took place in a very positive, open atmosphere," Kubitschek said of his meetups with Weidel. He said the meetings hadn't been about individual issues, but about "behavioral teachings and attempts at mediation," very fundamental questions of strategy. Things like: "Where does the AfD stand in the political arena? How can they work together to preserve party unity? How can external pressure be fended off? How can the party base be encouraged and how can the process of finding consensus be institutionalized?"

Kubitshek's conclusion is that "all participants agree that pacifying the party is one of the most important tasks of all." He said he experienced Weidel as a smart, open-minded and well-read woman. "I think she understands what Höcke means and wants," he said.

A mail from Weidel in 2013, before she joined the AfD, made public by the Welt am Sonntag newspaper, indicates that Weidel and right-wing radical Höcke hold similar views. In it, Weidel's tone sounds a lot like Höcke's. At the time, she was already railing against "culturally alien peoples such as Arabs and Sinti and Roma" and against politicians she described as being "puppets" of the powers that won World War II. In parliament, she would later agitate against "headscarf girls, knife-wielding men on welfare and other good-for-nothings."'

'But the success of the far-right wing is also attributable to the fact that it has become highly professionalized, tightly organized and has shifted its strategic direction. Members of the Flügel no longer aspire to join the top ranks of the AfD and instead prefer to operate in the background, avoiding public conflicts. That gives critics fewer opportunities to attack. More moderate members of the party even seemed to have developed a certain nonchalance about the possibility of being officially monitored. At the beginning of his speeches, party leader Meuthen is even fond of mockingly addressing the "dear informants who are present," after all, "I have a very big heart."

In 2016, Meuthen became one of the first people from the more moderate AfD camp to open up to Höcke and to attend meetings held by the far-right Flügel. Internally, he has always been considered a weak party leader, and later, he struggled as a result of a campaign donation scandal. The fact that Meuthen was able to become the party's leading candidate in recent elections for the European Parliament is also in part due to the fact that he has withheld from criticizing the far-right in his party. In return, Flügel operative Kalbitz personally made phone calls and sent out text messages in support of Meuthen's candidacy.

Of course, Meuthen views the situation differently. "There has never been such a pact," he said. He claims that Kalbitz only promoted him because he thought he was the right candidate. "Just as I have promoted Kalbitz in the election to the state parliament." He then added, "If the Flügel is reasonable and clearly demarcates itself from extreme positions, I see no reason to take action against it." He said there had been "positive changes" in that wing of the party.

There are also other prominent opponents of Höcke and his wing who have recently grown conspicuously quiet. One example is Beatrix von Storch. One senior member of the Flügel mockingly says she just has "fine instincts" and that she's surely thinking about elections for the national executive committee at the end of November. Storch did not want to comment for this story.'

The AfD is already and will only become more a Björn Höcke Party. Where this will end is mainly up to the German electorate. But as we know, it's hard to trust the electorate, not only in Germany, everywhere.