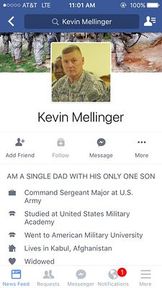 On fraud, FB, romance and the military, Jack Nicas in NYT:

Ms. Holland and Mr. Anonsen represent two sides of a fraud that has flourished on Facebook and Instagram, where scammers impersonate real American service members to cheat vulnerable and lonely women out of their money. The deception has entangled the United States military, defrauded thousands of victims and smeared the reputations of soldiers, airmen, sailors and Marines. It has also sometimes led to tragedy.

The scheme stands out for its audacity. While fraud has proliferated on Facebook for years, those running the military romance scams are taking on not only one of the world’s most influential companies, but also the most powerful military — and succeeding. Many scammers operate from their phones in Nigeria and other African nations, working several victims at the same time. In interviews in Nigeria, six men told The New York Times that the love hoaxes were lucrative and low risk.

“Definitely there is always conscience,” said Akinola Bolaji, 35, who has conned people online since he was 15, including by posing on Facebook as an American fisherman named Robert. “But poverty will not make you feel the pain.”

Facebook has long had a mission to “connect the world.” But in the process, it has created a global gathering place where the crooks outnumber the cops.'

'Mr. Holland knew about his wife’s Facebook friend. An Army Airborne veteran himself, with tours in Honduras and South Korea, he once helped Ms. Holland prepare a care package of snacks, underwear and foot powder for Mr. Chris. (The package was returned.) Now he said he realized his wife’s relationship with this man had gone further than he understood.

“I had a lot of anger,” Mr. Holland, 53, said in an interview last year. “But I also had a little bit of compassion because I knew how bad she felt.”

When Ms. Holland returned home from the hospital, her relationship with her husband and her then 82-year-old father, whom she was caring for, was strained. One person kept talking to her: Mr. Chris.

“He wanted to make it up to me,” she said. “He was going to sit there, look my husband in the eye and tell him how sorry he was and pay him back.”

Ms. Holland said she had been convinced that it was a scam. But Mr. Chris swore to her that he had been delayed by a military operation. She received an email from someone claiming to be Gen. Stephen Townsend of the Army, confirming the story. There were soon new photos of Mr. Chris injured in war, documents showing he was due big insurance payments and promises she would be reimbursed for more than she had lost.

She just needed to get him home.

But the strains remained. Mr. Holland was arrested on domestic violence charges in August 2018, according to a police report. Ms. Holland dropped the charges. She said in an interview last year that there had been another incident in 2017.

On Dec. 23, 2018, Mr. Holland shot and killed Ms. Holland and her father at their new home. Mr. Holland then turned the gun on himself.

“But poverty will not make you feel the pain.”

There are always excuses not to feel the pain you are causing. Some of these excuses are valid.