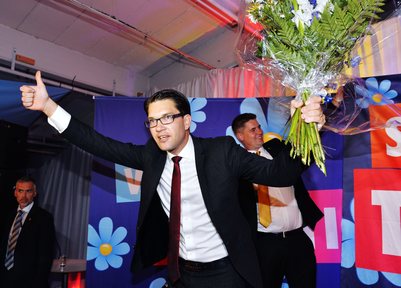 On the globalization of nationalism - Jo Becker in NYT:

'To dig beneath the surface of what is happening in Sweden, though, is to uncover the workings of an international disinformation machine, devoted to the cultivation, provocation and amplication of far-right, anti-immigrant passions and political forces. Indeed, that machine, most influentially rooted in Vladimir V. Putin’s Russia and the American far right, underscores a fundamental irony of this political moment: the globalization of nationalism.'

'Russian and Western entities that traffic in disinformation, including an Islamaphobic think tank whose former chairman is now Mr. Trump’s national security adviser, have been crucial linkers to the Swedish sites, helping to spread their message to susceptible Swedes.

At least six Swedish sites have received financial backing through advertising revenue from a Russian- and Ukrainian-owned auto-parts business based in Berlin, whose online sales network oddly contains buried digital links to a range of far-right and other socially divisive content.

Writers and editors for the Swedish sites have been befriended by the Kremlin. And in one strange Rube Goldbergian chain of events, a frequent German contributor to one Swedish site has been implicated in the financing of a bombing in Ukraine, in a suspected Russian false-flag operation.

The distorted view of Sweden pumped out by this disinformation machine has been used, in turn, by anti-immigrant parties in Britain, Germany, Italy and elsewhere to stir xenophobia and gin up votes, according to the Institute for Strategic Dialogue, a London-based nonprofit that tracks the online spread of far-right extremism.

“I’d put Sweden up there with the anti-Soros campaign,” said Chloe Colliver, a researcher for the institute, referring to anti-Semitic attacks on George Soros, the billionaire benefactor of liberal causes. “It’s become an enduring centerpiece of the far-right conversation.”'

'There is another curious Russian common denominator: Six of Sweden’s alt-right sites have drawn advertising revenue from a network of online auto-parts stores based in Germany and owned by four businessmen from Russia and Ukraine, three of whom have adopted German-sounding surnames.

The ads were first noticed by the Swedish newspaper Dagens Nyheter, which discovered that while they appeared to be for a variety of outlets, all traced back to the same Berlin address and were owned by a parent company, Autodoc GmbH.

The Times found that the company had also placed ads on anti-Semitic and other extremist sites in Germany, Hungary, Austria and elsewhere in Europe.'

'In February, the Sweden Democrats’ Mr. Karlsson strode into a Washington-area hotel where leaders of the American and European right were gathering for the annual Conservative Political Action Conference. As he settled in at the lobby bar, straightening his navy three-piece suit, he was clearly very much at home.

At the conference — where political boot-camp training mixed with speeches by luminaries like Mr. Trump and the British populist leader Nigel Farage — Mr. Karlsson hoped to learn about the infrastructure of the American conservative movement, particularly its funding and use of the media and think tanks to broaden its appeal. But in a measure of how nationalism and conservatism have merged in Mr. Trump’s Washington, many of the Americans with whom he wanted to network were just as eager to network with him.

Mr. Karlsson had flown in from Colorado, where he had given a speech at the Steamboat Institute, a conservative think tank. That morning, Tobias Andersson, 23, the Sweden Democrats’ youngest member of Parliament and a contributor to Breitbart, had spoken to Americans for Tax Reform, a bastion of tax-cut orthodoxy.

Now, they found themselves encircled by admirers like Matthew Hurtt, the director for external relationships at Americans for Prosperity, part of the billionaire Koch brothers’ political operation, and Matthew Tyrmand, a board member of Project Veritas, a conservative group that uses undercover filming to sting its targets.

Mr. Tyrmand, who is also an adviser to a senator from Poland’s anti-immigration ruling Law and Justice party, was particularly eager. “You are taking your country back!” he exclaimed.'

The far-right in Europe and the US does Putin's bidding. Weaken the liberal democracies, even civil is side effect, why not?