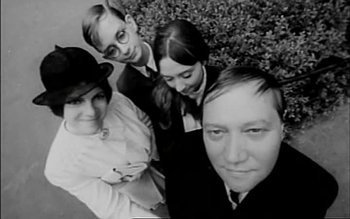 A friend alerted me to the movie "The Cremator" by Juraj Herz, playing at Metrograph on Ludlow Street. There were seven people in the beautiful theater, my godson fell asleep, but he was tired.
Here's what J. Hoberman wrote in The Times:

'Herz, who died last year, was a close friend of the great Czech animator Jan Svankmajer, with whom he studied puppetry and intermittently worked. The two also had a similar subversively gothic sensibility. “The Cremator,” adapted from a novel by Ladislav Fuks, is a disquieting mix of satire and horror, filled with inexplicable characters seen in fragmentary close-ups or through distorted lenses.

The blandly creepy protagonist, Karel Kopfrkingl (played by the portly, moon-faced Rudolf Hrusinsky, a frequent presence in Czech new wave films), is a petty bourgeois monster — an unctuous mortician, abstinent yet authoritarian, who lords over his wife and children as well as the impressive crematory that he calls the “temple of death.”

Kopfrkingl rarely stops talking — persistently explaining himself in soft, insinuating tones, and frequently referencing the teachings of Tibetan Buddhism. His worldview is altered, if not shaken, by a former comrade-in-arms, Walter Reinke, who arrives in Prague in advance of Hitler’s army.

Reinke, an Austrian with whom Kopfrkingl served during World War I, persuades him that, thanks to a supposed drop of German blood, Kopfrkingl is something more — and better — than Czech. Thus Kopfrkingl becomes co-opted into the ideology of the Third Reich, incorporating Nazi theories about euthanasia and racial purity into his own philosophy.

In its dark comedy, “The Cremator” has been compared to mid-1960s landmarks like Stanley Kubrick’s “Dr. Strangelove” and Roman Polanski’s “Repulsion.” (It also evokes “The Loved One,” Tony Richardson’s 1965 satire of Hollywood burial practices.) But the movie has its own ominous mood. The foreboding is accentuated by Kopfrkingl’s visit to a wax museum populated by living models, and the brutal boxing match to which Reinke insists on taking him.

As he falls under Reinke’s spell, it becomes apparent that Kopfrkingl, this fastidious apostle of cremation, is presiding over the death of Czechoslovakia — and that he has also lost his mind. The movie’s ending is a shocker if you haven’t read the novel, and perhaps even if you have. (Herz, who survived World War II in a Nazi concentration camp, drops all understatement during the final 10 minutes.)'

One one the more disturbing aspects of this movie from 1969 is the Tibetan Buddhism, the bourgeois monster, which may be not so much a monster just very bourgeois i.e. one of us, is attracted by Buddhism and the belief that life is not much more thanf suffering, he genuinely believes rf maybe he just pretends to believe that killing people is liberating people.

One could interpret this movie as: the fascists were buddhists, at least some of them.

"The Cremator" is an experimental opera, a certain sense of humor and estheticism struck me as typically Czech. Maybe the subdued, consequent and therefore horrifying irony: the intentions of the mass killers are good.