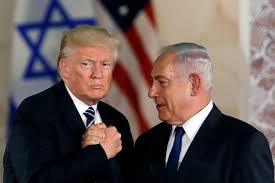 'The deluge of apocalyptic headlines and social-media posts on the Netanyahu government’s U-turn after a tweet by Donald Trump, and now the blocking of the visit to Israel and the West Bank by U.S. congresswomen Rashida Tlaib and Ilhan Omar, are greatly exaggerated. Nothing whatsoever has changed.

'Netanyahu is a winner because he doesn’t care about what liberal Americans – Jews and non-Jews – think about him. He knows they hate him either way. He cares about what Israelis who will be voting in next month’s election think – especially those belonging to his rather dispirited right-wing base. For them, cooperating closely with Trump and keeping two Muslim members of Congress out are both signs of strength and statesmanship. Those who see the way he capitulated in the face of one tweet probably had no plans to vote for him anyway.
Trump is a winner as well. Not only has he shown how he can get Israel’s government to change its policy based on just one of his tweets, but he also continues to exploit a tiny handful of rather inconsequential politicians and use them to typify the entire Democratic Party. He wants Tlaib and Omar to be recognizable faces of the Democrats, and this has perfectly played into his hands.
Tlaib and Omar are winners as well. They’ve gained both publicity and points for being brave radicals standing up to Netanyahu and Trump without even having to land at Ben-Gurion Airport. The visit would have garnered publicity as well, but it would have also been a potential minefield with every word uttered at every public meeting, and every person attending, coming under intense scrutiny. Any detail during the trip that could have been construed as support for terrorism would have been used against them.
This way they get to stay home and reap all the kudos without any of the risk. So the media attention would be for them, not for the Palestinians. But when has that ever bothered a politician?'

The Palestinians are an afterthought - what's new?

And the inquisitor-generals of our times are getting bigger and bigger.