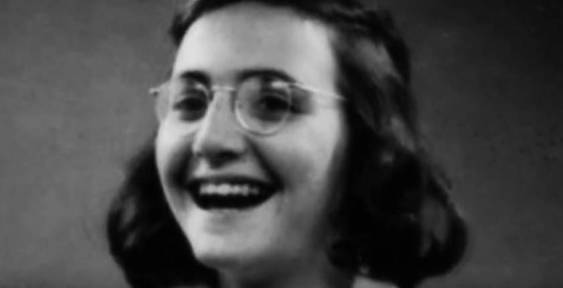 "Anne’s youth surely had something to do with the extraordinary reception of the book. The murder of a cantankerous old man, though no less heinous, would not have been nearly as poignant. To some, Anne Frank is a saintly figure. The house on the Prinsengracht in Amsterdam, where the Frank family was penned in with four other Jewish fugitives, is now a pilgrimage site, visited by millions of people, weeping, taking selfies, leaving flowers, gazing at the quasi-sacred walls decorated with Anne’s collection of movie star pin-ups. Otto Frank received a letter from a priest who told him he prayed to Anne, as though she really were a saint. In the Japanese city of Nishinomiya there is a Rose of Anne Church. Mormons in Salt Lake City gave Anne a posthumous baptism, to make her one of their own. Some people even claim to have seen Anne, as a kind of apparition. When a horse chestnut tree in the garden behind the hiding place became diseased some years ago and was scheduled to be cut down, there was a campaign to save it. The tree had been glimpsed by Anne through the curtain of a back window, so the precious relic had to be preserved. The tree did not survive, but after it blew down in a storm, some visitors took chips from the trunk, treating them like the fragments supposed to have come from Christ’s cross.

The Christian imagery is no coincidence. Jews don’t have saints. But certain instances of Jewish remembrance of the Holocaust have been Christianized nonetheless. Sainthood is connected to martyrdom. One of the centres of Holocaust remembrance, in Los Angeles, is called Martyrs Memorial and Museum of the Holocaust. A martyr cannot be a mere victim. Martyrs die for a reason; they sacrifice themselves, like Christ, for a belief, a principle, or a cause. Religious faith is soaked in their blood. Martyrs offer us a chance of salvation. Their suffering supposedly ennobles them, and by extension those who worship them.'

'Reading this, I was reminded of something the late Amos Oz once said in an interview with a German newspaper about the Christian idea of purification through suffering. In the eyes of many people, Oz said, the Jews were “purified” by the Holocaust, “as though the showers in the gas chambers had sprayed the victims with a moral detergent”. This might explain some of the extreme versions of anti-Zionism: the Jews should be better, more saintly, than other people; and so bad Jewish behaviour should come in for special opprobrium.

The notion of Anne Frank’s diary as a source of redemption, or at least consolation, received a further boost from the American stage play, written by two Hollywood screenwriters, Frances Goodrich and Albert Hackett, in 1955. The famous last words in the play are taken from a diary entry on July 15, 1944: “In spite of everything, I still believe that people are really good at heart”. Thus, the story that would end in Anne’s squalid death was given an uplifting Hollywood ending.

The context of these words is hardly uplifting, however. Anne was fighting against despair when she wrote them. In the same paragraph from which the quotation was drawn she wrote: “I hear the approaching thunder that, one day, will destroy us too, I feel the suffering of millions”. But she found it impossible “to build my life on a foundation of chaos, suffering and death”. One month before this attempt to cling to a vestige of hope, she expressed a much darker view of humanity:

I don’t believe the war is simply the work of politicians or capitalists. Oh, no, the common man is every bit as guilty … There’s a destructive urge in people, the urge to rage, murder and kill. And until all of humanity, without exception, undergoes a metamorphosis, wars will continue to be waged, and everything that has been carefully built, cultivated and grown will be cut down and destroyed, only to start all over again!

These were not the sentiments that made Anne Frank into a global object of worship.'

'The Dutch claimed her early on (less so now) because Anne could be made into a symbol of Dutch innocence during the war, even though she was almost certainly betrayed by a Dutch person, and 75 per cent of Jews in the Netherlands were taken away to be murdered, a higher percentage than anywhere else in Western Europe. This couldn’t have been done without Dutch collaboration. In fact, Anne, whose family emigrated from Germany in 1933, never held a Dutch passport, after her German one was taken away, even though her “first wish after the war [was] to become a Dutch citizen. I love the Dutch. I love this country, I love the language, and I want to work here”.

The Americans claimed Anne in a way, by turning her into a perky American teenager on stage and in the movie. Moved by the play when it was performed on Broadway, an American schoolgirl wrote to the producer that it “gave us all the feeling of how lucky we are to live in America, the land of the free”. What she didn’t know was that Otto Frank’s desperate attempts to get life-saving visas for his family to escape to the US were all turned down. Apparently, even the North Koreans found a way to claim Anne Frank a while ago by assigning the diary to schoolchildren, instructing them to see President George W. Bush as Hitler and the North Koreans as his genocidal victims.

But the most ferocious battle over Anne Frank’s soul was waged by American Jews, starting in the 1950s. The authors of the play, as well as Otto Frank, were accused of reducing the specifically Jewish content of Anne’s story, most vociferously by the novelist Meyer Levin, whose adaptation had been rejected, and who felt that Anne’s story should not have been told by a gentile. She was made to appear less Jewish than she supposedly was, and the uniqueness of the Jewish experience was played down.

There was some truth to this. Otto Frank wanted his daughter’s fate to contain a universal message, and not just a story of Jewish suffering. But there was a class element involved in the row as well. The Franks were a typically assimilated German Jewish family. Religion, or Jewish customs, hardly featured in their lives. Otto even proposed to give Anne a children’s version of the New Testament as a Hanukkah present. Her sister Margot thought that St Nicholas’ Day, a very Dutch celebration Anne took more seriously, might be a more appropriate occasion. The point is that the kind of educated assimilation, exemplified by the Frank family, is often seen by less privileged Jews with more tenacious roots in Jewish culture as a form of snobbery and self-hatred.

There is no evidence that Anne Frank thought she represented anyone but herself: a person of Jewish origin, caught up in a vicious and to her meaningless persecution, a growing woman with a lust for life. But the universal is often born in the particular. Despite all the claimed affinities, her very personal voice is also what explains her appeal, even to people with whom she had nothing in common. It is why she is still read all over the world. It is, above all, what made her a born writer.'

Buruma could have mentioned Cynthia Ozick, one of the more articulate defenders of Anne Frank as a huge literary talent, but that's a detail.

She was a 'born writer' turned into a Jewess and then later into a saint, betrayed in other words more than once.

An anecdote: my father who happened to know the Franks before the war always claimed that Margot Frank was more intelligent and more beautiful than Anne.