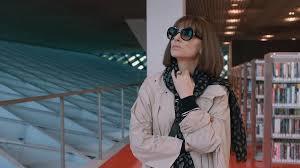 Richard Lanklater ('Before Sunrise", "Before Sunset", "Before Midnight) directed “Where’d You Go, Bernadette,”, adapted from the novel by Maria Semple.
Cathe Blanchett's performance is, as has been noticed, remarkable, but the movie itself is unfortunately not as convincing as Cate Blanchett.
Blanchett is an architect, a wife, a misanthrope and a mother, not necessarily in this sequence, and the underlying theme appears to be that creative people can become ill, or at least unstable, when they are not creative.
Creativity as another antidepressant.

"For Bernadette, of course, and for us, in the audience, the joke is not that her identity’s been stolen but that she has way too much of it. Just as the unstable hillside of her property slides down one day and floods the house next door with mud, so her self overflows the bounds of her regular life. That is why Blanchett’s performance, like that of Katharine Hepburn, in “Bringing Up Baby” (1938), treads so joyfully close to excess—never quite over the top, yet savoring the pleasures of the brink. What these actresses offer is a kind of ecstatic warning: as your taste for experience grows avid and unconstrained, and as your laughter peals like a bell, people will fall in love with you, then fear you, and eventually find you mad."

I didn't regret seeing the movie, although I was distracted for at least five minutes by the fact that I saw a rat in the empty theater, but I didn't fall in love with Bernadette, I didn't find her mad and I didn't fear her, mainly I longed for "Before Sunrise" - whatever you can say about that movie, at least "Before Sunrise" made you long for those encounters that will change your life. Perhaps Mr. Lanklater is better in Vienna than he is in Seattle and the Antartica.