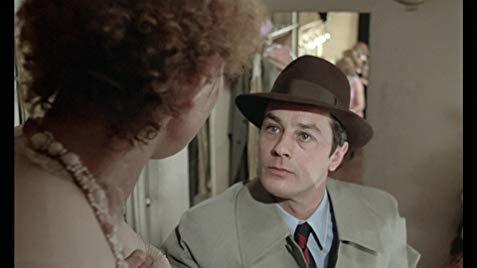 'This urge to accommodate oneself to new conditions, however unsavory, and perhaps—should the opportunity arise—to take advantage of them is visible throughout the film, and all the more galling for being couched in courtesy. Witness Klein, at the start, doing business with a Jewish customer who wants to sell a seventeenth-century Dutch painting, presumably in readiness for leaving France while he still can. A little haggling ensues, and Klein gets the painting for a pittance. (Its subject is a gentleman, clad in black, holding up a flask that contains a golden liquid. Could it be urine? Is he another monitor of the human species?) Though Klein would never put the matter so crudely, he is reaping a tidy profit from the persecuted. He floats above their woes.

Not for long. One day, a copy of a Jewish newspaper is left at his door. Klein is dismayed, and he presents himself at the offices of the paper, calmly explaining that, as a non-Jew, he should not have received it. Proceeding to the Préfecture de Police, he learns that there is a second Robert Klein: a welcome relief for our hero, for what is more easily resolved than a case of mistaken identity? The trouble is that he is now a figure of interest to the authorities.'

'Sleuthing takes him to a number of destinations. One is a seedy refuge in Pigalle, with rat droppings on the floor and a lone bullet, left in a drawer; another is a château in the countryside, with snow on the ground and a highborn family in residence. The lady of the house (Jeanne Moreau), we gather, is the lover of the second Klein, though she confuses the issue by visiting the bedroom of the first. Our man also travels to Strasbourg to see his aging father (Louis Seigner), whose outrage at the suggestion of Jewish blood in the family’s veins is all too revealing. “We’ve been French and Catholic since Louis XIV!” he cries out. (Losey offered the part of the father to Fellini. No luck.) Strewn across the film are a handful of clues, which lead us to suspect that the other Klein is a member of the Resistance—that he is as brave and as principled as Delon’s Klein is slippery, suave, and hollow. In one haunting sequence, the two of them speak on the phone. Yet I continue to wonder, viewing the movie again, if the gallant Klein truly exists, or if the art-loving, morally compromised Klein merely needs him to exist. Maybe we all dream of a better half, who could somehow atone for our sins.

So do we actually see the double, face to face? Never. The closest we get is a glimpse of a hand, supposedly his, raised aloft and waving, like that of a drowning man, in a crowd that is swept along at a Paris velodrome. By now, it matters not a jot, in the bureaucracy of terror, which Klein is which, for the roundup of Jews is under way, and the trains are waiting. One of the final images, in Losey’s icy labyrinth of a film, is of children being forcibly torn from their parents by officers of the law. How blessed we are to live in a decent and democratic age where such things could not possibly occur.'

Read the review in The New Yorker here.

The movie, playing now in Film Forum reminds oneof a Modiano novella, and also, because of the doppelgänger, which may not be a doppelgänger, of the Dutch novel "The Darkroom of Damocles" by W.F. Hermans.

The performance of Alain Delon is superb, to be human is to be an opportunist, give or take a few exceptions. And also: who you are is determined by the state of exception.