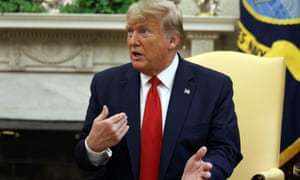 "But the whistle-blower complaint renewed questions about whether some of his freelance proposals were inappropriate. The accusation, even with few details, quickly gained traction in part because of longstanding concerns among some intelligence officials that the information they share with the president is being politicized."

When the distrust between a president and his security services becomes too big he will start to believe that the "deep state" is all around him.