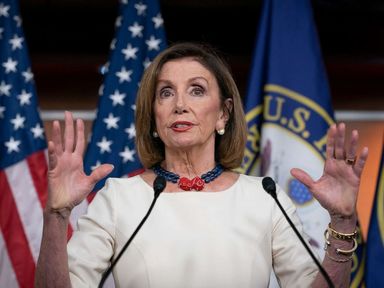 "A Reuters/Ipsos poll this week revealed that thirty-seven per cent of Americans think Trump should be impeached, which is four per cent less than in early September. Pelosi is betting that those numbers will rise as the Ukraine story is absorbed more fully by the public. But how long will that take? The Mueller Report, after all, provided ten potential examples of obstruction of justice, and yet, perhaps because of Mueller’s highly formal, reticent testimony before Congress, the report never seemed to have a decisive public impact. “You have to be very clear and very focussed on what would be an impeachable offense,” Pelosi said. “People say you changed your mind. I didn’t change my mind. The facts changed the situation. Last week, on Constitution Day, of all days, the news broke of the President’s total betrayal of the Constitution—and this takes us into a whole new realm. Use any analogy, anything you want: ‘A new day has dawned’; ‘We’ve crossed the Rubicon.’"

We may have crossed the Rubicon, but 2019 is 1974, it's good to keep in mind that according to some historians Nixon was the most progressive president the US had in decades.
And as Remnick's article once again makes clear: impeachment or no impeachment, it's about winning the elections in 2020.

The words "he has given us no choice" make clear that Pelosi would have preferred no impeachment.