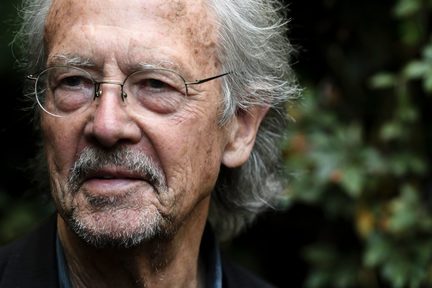 On apologists and literature - Aleksandar Hemon in NYT:

'Mr. Handke’s politics irreversibly invalidated his aesthetics, his worship of Mr. Milosevic invalidated his ethics. At Mr. Milosevic’s funeral, he said, “The world, the so-called world, knows everything about Yugoslavia, Serbia. The world, the so-called world, knows everything about Slobodan Milosevic. The so-called world knows the truth … I don’t know the truth. But I look. I listen. I feel. This is why I am here today, close to Yugoslavia, close to Serbia, close to Slobodan Milosevic.” The writer who could speak those words can’t have anything of value to say.'

'Mr. Handke is the Bob Dylan of genocide apologists.'

The sentence about Bob Dylan is unforgettable, as a friend pointed out to me this morning. Although I'm not sure what Bob Dylan and Peter Handke have in common, besides the Nobel Prize.
I have to admit that I thought for a few seconds: did Bob Dylan also speak at the funeral of a mass murderer?

Aleksandar Hemon is right of course that Peter Handke's defense of Milosevic is delusional and yes immoral, but does this mistake really mean that Handke doesn't have anything of value to say? That's a bit too comfortable.
It's rather possible that people make mistakes, maybe even huge mistakes, and still have valuable things to say. It's even possible that they have valuable things to say not despite of their mistakes but because of it.

Also, Peter Handke's defense of Milosevic, yes delusional and immoral, is at least not proof of sheer opportunism, so much is for sure, that makes these delusions even slightly intriguing, from a psychological point of view.

If we closely examine the private opinions of great authors and artists of all times and we decide that we can only live with artists and authors with impeccable opinions we will end up with a small amount of probably mediocre ones.

No, great art is not an excuse for all kinds of mistakes and other sins, but to reduce the other to his misstep is the opposite of humanism. Especially when the misstep is not a crime. Compared to the poisonous pamphlets of the great author Louis-Ferdinand Céline or the opinions of the great poet Ezra Pound the mistaken opinions of Handke appear to be minor. That's not to say that the massacres that Milosevic and Karadzic planned, ordered and committed are minor, not at all.
But a perpetrator is not the same as an apologist. If we believe they are the same, then we should accuse in the future not only the defendant but also his lawyer.

Whether Mr. Handke deserves the Nobel Prize or not should be based on his work not on his opinions. We should be able to accept that great works of art can be produced by people whose opinions might abhor us. I would even say: whose deeds might abhor us.