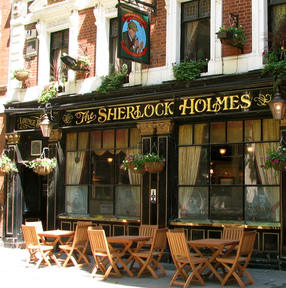 A friend of mine who used to work at the hotel where I have breakfast every day -- except on Sunday -- invited me for lunch.
Over a steak he informed me that he had invented a game called Sherlock Holmes.
The game goes like this: You approach a stranger on the subway and you say to the stranger: “Are you up to a little subway game?” If the stranger says “yes”, you must make a guess about the stranger and the stranger must make a guess about you. Let’s say what kind of work you do, how many kids you have.
Every right guess gives you a point.
My friend explained to me that women are more willing to play this game than men.
To me the game means that there is some hope for mankind after all. At least for those who are riding the subway.