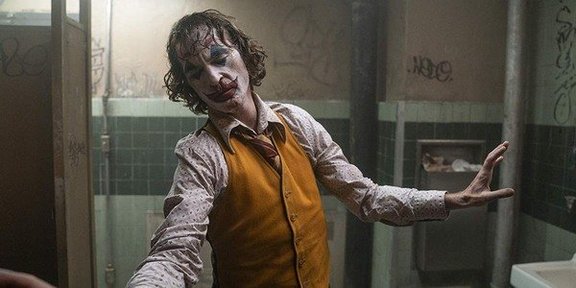 'It’s hard to say if the muddle “Joker” makes of itself arises from confusion or cowardice, but the result is less a depiction of nihilism than a story about nothing. The look and the sound — cinematography by Lawrence Sher, cello-heavy score by Hildur Gudnadottir — connote gravity and depth, but the movie is weightless and shallow. It isn’t any fun, and it can’t be taken seriously. Is that the joke?.'

This is A.O. Scott in the Times, it's rather harsh, so harsh that something must have irritated Scott a lot.

First of all, 'Joker' is less nihilistic than the average Tarantino, including the last one, and above all, it's unclear what we mean by this abused term 'nihilistic'. Most often it means that amoral acts are performed in movies, books, on stage, or reality, and that these acts have not been condemned enough, the condemnation has not been to our liking, and there we come up with the term "nihilism."

You silly bastards, you forgot to condemn.

The robber who kills out of fear or by mistake is not considered a nihilist, because money is his goal. He happens to be unfortunate enough not to be a talented baseball player or CEO or whatever. The amoral act is just a side effect of what he wants and what we all want, a little bit more money.
A terrorist can be considered a nihilist because he kills and maims for what he believes is a better world.
Here killing is more than a side effect, he kills often also to purge.
A serial killer is most often referred to as a psychopath.

Now the Joker in this Todd Phillips movie is above all a patient. We see his case worker, we see the system failing (of course, the system is always failing), we see almost everybody failing, including the Joker who is not a very successful clown and indeed not a very funny one. That of course is the point. (We see briefly Chaplin, I believe Modern Times, a homage? Or a reminder that the old Jokers were less violent than the new ones?)

This movie could very well make the point that if we choose to ignore the mentally ill we should not be surprised that this will backfire in a most unpleasant way. This is a very serious point. We may dislike the lack of subtlety with which Mr. Phillips is making this point, but serious it is.

Another serious point this movie is making is that the revolution is as awful, unjust and repellent as the awful state it wants to replace. A point very much worth debating, especially among those who are in love with the word "revolution" as if it's a sexual game they happen to like a lot.

Something is missing in the "Joker" - I agree, I would say the main problem is that the psychological explanation for the misdeeds of the Joker, his defense, the defense of Mr. Phillips is too one-dimensional, too easy, too convenient.

But Mr. Scott's review doesn't acknowledge that this movie is also about acting (Joaquin Phoenix), and there it succeeds very well. It's an open invitation to discover the Joker in yourself.
I would even say that you can see a new, brave humanism in this movie.

We are all clowns, there is no escape, let's do our utmost to be an average clown, not a killer clown.

More belief in mankind is not realistic.