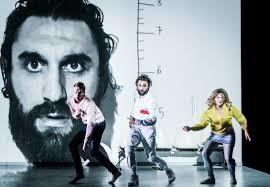 The Berlin Schaubühne adapted Édouard Louis’s novel “History of Violence” - the performance can be seen at St. Ann's Warehouse til December 1.

A.J. Goldmann wrote in the Times:

"In Mr. Ostermeier’s intense, involving production, four actors animate Mr. Louis’s crisp, self-reflexive writing, often videotaping one another using iPhones, with the results then projected in grainy close-ups on a white wall behind the nearly bare stage. The events of Édouard’s fateful evening are revealed piecemeal, through a series of monologues and interrogations that tumble forth over an intermissionless two hours.

Laurenz Laufenberg, one of the Schaubühne’s most captivating young actors, plays Édouard with a remarkable blend of strength and vulnerability. Renato Schuch gives a terrifying and complex performance as the perpetrator, Reda, investing the character with disarming charisma before exploding in an outburst of brutality mixed with self-loathing. Alina Stiegler and Chistoph Gawenda play Édouard’s antagonistic older sister and her husband, a truck driver, with a bit too many working-class clichés, but are more convincing as detectives, doctors and assorted others."

I mostly agree with this assessment, though theater without videotaping would be revolutionary these days. Or perhaps we should admit that we are so addicted to the close-up that theater without the possibility of a close-up doesn't give us much gratification.

On Thursday night the conversation afterwards was a bit dull, perhaps this is inevitable, the compliment disguised as question is seldom the beginning of a vivid conversation, but Mr. Louis did remark (I paraphrase) that the question always comes up: who owns the story. And that he wanted all of the characters in his book, and this worked out well in the play, to have the possibility to tell their part of the story with a sense of dignity.
Even the perpetrator - a rendezvous turns into a robbery and a rape - is worthy of our compassion, which especially these days is quite rare.

The rape itself on stage is as Mr. Louis put it not a metaphor, he doesn't want violence to be a metaphor, he wants us to see the real violence, and he wants us to change, he wants the world to change, probably all artists want to the world to change, but some want this a bit more than others.
The question remains whether this confrontation with staged or well-written violence will change our minds on violence, or whether we as an audience reach the conclusion that violence, physical or emotional, is part of the story.
I was impressed by the acting and by the writing, but after the show I did feel that violence was a force of nature, a given, somethings that drives us if for no other reason because of the fear for violence, a fear that is so omnipotent.
Imagination and violence are intertwined. We might not be violent ourselves, but our fantasies definitely are.