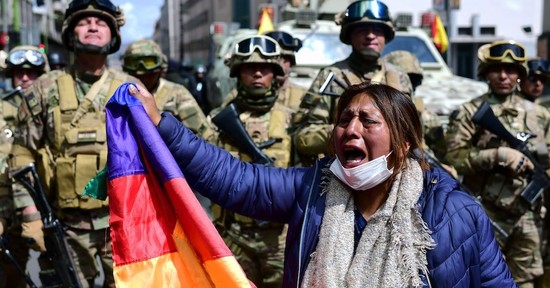 On another grey zone, Morales and Bolivia - Jim Shultz in NYRB:

'On the night of Evo Morales’s 2006 inauguration as president of Bolivia, the streets of La Paz, the country’s capital, were electric. A man who had once fed on discarded orange peels as a boy was becoming his nation’s leader. For the first time in the country’s history, the indigenous majority would look to the national palace and see one of their own, a president who came from among them and knew their lives firsthand. The streets were filled with both the humble and an assortment of Latin America’s glitterati: Venezuelan President Hugo Chávez zipped by in a tinted-window SUV; the aging Uruguayan writer Eduardo Galeano prepared to deliver an address. As I wound through the thronged streets in a taxi, the Aymaran driver behind the wheel said to me, shaking his head with a smile, “Imagine, a campesino is going to be president!”

But the moment I remember most came after the formal ceremony in the Congress, when Morales—or simply “Evo,” as most people called him—arrived at the stage in the middle of Plaza San Francisco, a place where, three years earlier, people had been shot and killed by the corrupt political order that was then swept away. A sea of tens of thousands spread for blocks, and Evo was as buoyant as I’d ever seen him. “You know what?” he proclaimed to the crowd. “I think the presidential palace is too big for just me. I am going to ask the vice-president and the speaker of the House to live there as well!” People cheered. Then he looked over, with a sly eye, to where the vice-president and his female partner stood on his right. “That’s OK, he wouldn’t have to sleep there every night!” People roared.'

'Morales was always a double-sided coin. On the one side, he was unquestionably a man of charisma. At a party a few weeks before his first election, he so charmed my toddler daughter that she asked him to dance. And there was never any question that he had a deep and genuine concern for the poor. But he also possessed an authoritarian streak that made even close allies nervous. In the run-up to the 2005 election that brought him and his Movimiento al Socialismo (MAS) party to power, I sat in on a series of meetings with leftist social movement leaders from around the country who debated what they called “their Evo problem.” He was positioned to become the first serious candidate of the left in decades—and what already worried them was their personal experiences of how he handled power.

Once in office, consolidating that power became Evo’s top priority. The MAS drafted and won public approval for a broad new national constitution. Among its many provisions was a change that would allow Evo to run for a second term. Morales and his allies set about vanquishing their adversaries on the right at the polls, but sometimes also in violent street conflict. They handled their critics on the left by enticing some to become members of the government and branding those who resisted as US pawns.

With his base solid, Evo began to do some very good things. By bringing the nation’s once-privatized natural resources back under state control at the start of the global commodities boom, he built an industrial foundation that produced solid economic growth through the entire global recession following the 2008 financial crash. His government used those funds to build schools and health clinics, to pave roads, and to establish a cash subsidy program to help children stay in schools. Poverty rates fell and indigenous pride was on the rise. In his second election, in 2009, Morales dispatched his opponent by a thumping margin of almost three to one. On the platform of his national popularity, he also thrust himself forward as a potent international symbol, making powerful speeches around the globe on indigenous rights and the protection of Mother Earth.

Back home in Bolivia, however, Evo’s actual commitment to both those causes was increasingly called into question. This tension came to a head in 2011 when Morales declared that he would ignore the vehement objections of local indigenous communities and build a highway through the TIPNIS rainforest in the country’s east. In protest, those communities mounted a long and difficult but high-profile march to the capital. Morales met this demonstration with brutal police repression that was broadcast on national television. When the women marchers yelled their dissent, Morales’s police bound their faces with masking tape to shut their mouths. Dozens of people were injured in the conflict, and a baby died. The shine on Evo’s presidency began to look tarnished.'

'While activists in far-away political capitals like London and Washington settled in to debate the semantics of the word “coup” and whether Bolivia had had one, Bolivians turned their attentions to two, simultaneous dramas unfolding in the country. One was Morales’s acceptance of asylum in Mexico and departure from the country. The other was Bolivia’s problem of sorting out its interrupted line of presidential succession. The vice-president and the respective heads of the Senate and House of Deputies, all Morales allies, had also resigned their leadership posts. Finally, on November 12, in a session of Congress boycotted by MAS, the Senate’s vice-president, Jeanine Áñez, a conservative Christian deeply embedded in the right-wing opposition but next in line, declared herself the interim president.

From the start, Áñez signaled that she didn’t see her short time in office as simply a bridge to new elections. On her arrival in the capital, she held up a giant leather-bound book and declared, “The Bible has returned to the palace!” She replaced Morales’s cabinet ministers, who’d resigned, with allies from the political right and not a single indigenous man or woman among them (only later did she appoint one). In both manner and action, she had the look of someone who had just been elected with a great mandate for change, rather than a back-bencher elevated to the post by accident and for a constitutional limit of ninety days.

Soon, the conflict in Bolivia’s streets became deadly. Outside of Cochabamba, thousands of coca growers, the core of Evo’s political base, marched toward the city center. On the outskirts, a barrage of police and military stopped them, triggering three days of pitched battles that left nine Evo backers dead and more than a hundred wounded. Police would later claim that the cocaleros were armed and had set off dynamite. A human rights attorney I know, who was on the scene, called it a slaughter. Áñez issued a decree granting a preemptive amnesty to soldiers and police—what some called “a license to kill.” On November 19, in the city of El Alto, not far from the capital, Morales backers sought to occupy and burn a gas storage plant. The police and military actions there left eight supporters of the former president dead. The day beforehand, in a neighborhood nearby, a young police officer was beaten to death by forces demanding Evo’s return.'

The recipe for disaster, as Jim Shultz points out, has been known for years. Cling to power, don't groom a successor, say to yourself a few times a day, 'I'm irreplaceable,' and forget the people.
Those who believe that the events in Bolivia were an orchestrated coup should ask themselves: why did these powerful people wait for almost 15 years to finally stage a coup? But what comes after an authoritarian leader is not always am improvement. The net result of too many uprisings is close to nil. Which is not to say that those uprisings by definition should not have taken place, sometimes the uprising is more about self-esteem and the refusal to live in shame than about real changes.