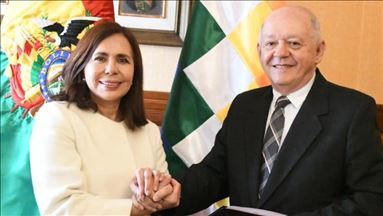 'DER SPIEGEL: Jeanine Añez also claims that the Bolivian conflict is being controlled from outside the country and that agents from Venezuela and Cuba had infiltrated your movement. Is that true?

Morales: In truth, many Venezuelans came into the country in recent months in order to campaign against me. We deported over 1,000 Venezuelans because they became politically active. As for the Cubans, I always admired Fidel Castro. He helped us with our health services and Cuban doctors carried out cataract operations on over 700,000 Bolivians free of charge. That is what I call solidarity among the poor.

DER SPIEGEL: Latin America is more ideologically divided now than any time since the Cold War. That is largely due to the crisis in Venezuela.

Morales: I admire Venezuela, first Chávez, then Maduro. Maduro triumphed against the interventionism of the Americans and overcame an attempted coup. He will also overcome the economic blockade.

DER SPIEGEL: Maduro takes brutal measures against opposition figures and journalists. Do you seriously see him as a role model?

Morales: For how long has Ms. Merkel been in power in Germany? I won't claim she is authoritarian just because she has been in office for 16 years.

DER SPIEGEL: That is a poor comparison. Germany has a parliamentarian system and the government can be voted out at any time. In presidential systems like in Venezuela, that is not possible. When do you intend to return to Bolivia?

Morales: If it were possible, immediately. I miss my homeland a lot. I miss my work, too. I worked every day from 5 a.m. to 10 or 11 p.m. Now it looks like future generations will have to carry on this struggle.

DER SPIEGEL: What is next for you personally?

ANZEIGE Morales: My safety in Bolivia needs to be guaranteed. If they want to put me on trial, they should go for it. I'll withstand it. But they cannot put me in jail, because I am innocent.

DER SPIEGEL: Mr. Morales, we thank you for this interview.'

Maduro doesn't appear to be a healthy role model. Not that there are so manny good rolde models, but Maduro?

Morales' defense is rather, the fight for the people turned out to be a fight for power.

This balanced article by Sabella Gomez Sarmiento on NPR.org reaches a similar conclusion:

'Schneider shares her views. "The problems in Bolivia arose, unfortunately, from the same problems that you see in Nicaragua and Venezuela, in Honduras and elsewhere where individuals decide that it's more important to stay in power than to follow democratic norms and the rule of law," he explains. "The result is almost inevitably a turn toward authoritarian practices, and unfortunately, also usually [a] turn toward corruption."

Even without Morales in office, Bojanic says he believes internal and external debt is as at sustainable enough levels that the economy will continue growing, and public infrastructure projects will not be halted.

The problem all along, he says, is that Morales grew to see himself as "indispensable" and undermined the rule of law to seek reelection. He points to how Morales stacked all branches of government with members of his political party, the Movement for Socialism, to allow him to run for another term.

"It is likely that he's going to be remembered as not the person who brought prosperity and greater equality to the Bolivian population but rather as the person who has pushed the country to basically the edge of a precipice," Bojanic says of the current social and political unrest.'

Too powerful a drug, power. Even when it begins with mostly positive side effects for the population.