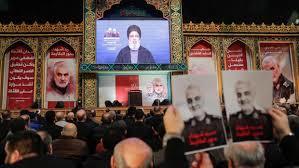 On megalomania and time - Yossi Melman in Haaretz:

'Although he had lacked a formal education, Soleimani was a talented military commander who was also politically savvy on both a tactical and strategic level. Speaking to the New York Times, former Mossad director Tamir Pardo remarked that the Quds commander’s professional life could be divided into two parts: “Until the Arab Spring, he is commander of a force that has branches in various parts of the world, active mainly in Syria, Lebanon and Iraq, but at the end of the day is a secret operational organization whose main purpose is terrorism.” According to Pardo, following the upheaval in the Middle East and the rise of ISIS, Soleimani became a regional policeman of sorts, who very skillfully exploited the secret infrastructure that he had established over the years, now carrying out operations in the open and scoring achievements for Iran.
The shift also planted the seeds that led to his death. From being a shadow operative, he surfaced and began to behave like a politician. Because of that, he thought he was immune.
In 2015, he flew to Russia for meetings coordinating Russian President Vladimir Putin’s moves in Syria. With Soleimani’s encouragement, Al Quds force fighters and the Shi’ite militias under his control deployed throughout the Middle East, and he was overstretching and losing.'

'The magnitude of the Iranian response depends first of all on Khamenei. He and his advisers have a number of options at their disposal. The most far-reaching would be to close the Strait of Hormuz, which would send world oil prices soaring and, in the process damage the U.S. economy. It is assumed that Trump (and China) can’t permit this to happen.
If Khamenei would order such a step, it will mean all-out war. If he orders the downing of an American plane, or the blowing up a U.S. embassy, (which is not easy and requires time and preparations under the observant eyes of U.S. intelligence), he would also be in for a very severe response.
But despite his hatred for the United States and his uncompromising rhetoric, Khamenei is a leader whose actions come from his head, not his gut. He considers his moves carefully, and his perception of time is entirely different than that in the West.
Iranians in general have long historical memories. One need only recall that the Iranians waited for the last day of Jimmy Carter’s presidency in 1981 to release the American hostages seized in Tehran in 1979. Iran’s supreme leader at the time, Ayatollah Khomeini, did that in an effort to exact revenge and to humiliate Carter.
So it’s reasonable to assume that Iran will try to retaliate resoundingly – but not necessarily immediately. Iran has acted on more than one occasion according to the saying “revenge is a dish best served cold.” It could, for example, focus its attention on actions that would hurt Trump’s reelection prospects. It could expand its efforts to take over Iraq and bring about the complete withdrawal of American forces there. It could continue to poke holes in its international nuclear agreement; or carry out extensive cyberwarfare against American or Saudi institutions.
Or it could do all of them while constantly attempting to take advantage of every opportunity for a terror attack against the United States and perhaps also here in Israel. But since Israel is a secondary target of Iranian anger these days, it can be assumed that it is not in Iran’s interest to drag Hezbollah and Syria to the front.'

Hubris, the mistaken belief that he was the Shia sheriff of the region killed Soleimani, but revenge is indeed a dish served best cold.

If the crowds had not stormed the American embassy in Bagdad the last hours of 2019, maybe Soleimani would still have been alive as well. You can also run out of luck.