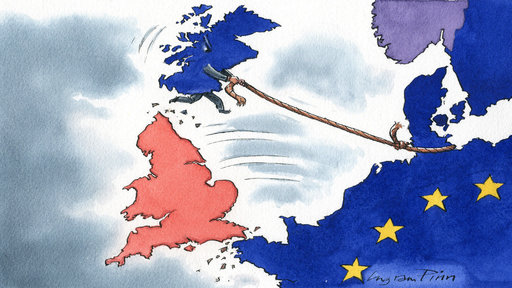 On breaking up the union - David Edgerton in NYT:

'Mr. Johnson’s plan is likely to lead to a border between Northern Ireland and Britain for the first time in modern history. The policy — designed to allow Britain to radically break with Europe while Northern Ireland remains aligned with the rest of the bloc, including the Republic of Ireland — is an astonishing betrayal of the Ulster unionists, whose politics is predicated on the sanctity of the United Kingdom. And drawing Northern Ireland into the same regulatory system as its southern neighbor poses a remarkable opportunity for the nationalists. A once-more united Ireland is firmly in view.

That certainly hasn’t gone unnoticed in Scotland. The pro-independence Scottish National Party, which took 48 of Scotland’s 59 seats in December’s election, reads the writing on the wall. A large majority of Scots voted to remain in the European Union during the 2016 referendum; to allow Northern Ireland but not Scotland to remain aligned with the European Union’s market will only add to the sting. Nicola Sturgeon, the S.N.P.’s leader, has already formally requested that the Scottish parliament be given powers to hold an independence referendum. Mr. Johnson, for his part, has made clear that he intends to stand in the way of such a vote, but he may not be able to block it forever.
So maybe this is the end. Not this week, but perhaps by the end of the decade. First Scotland, then Northern Ireland, leaving just England and Wales, a mini-union, which itself could break up under pressure from Welsh nationalists.'

'After being released from the unionist grip, Northern Ireland could join a flourishing Irish economy and a more socially liberal — how things have changed! — society. For the nationalists it will represent a long-desired reunion. Although Irish unity is what unionists most fear, they might now be able to reconcile themselves to their Irishness after being betrayed by London.

Scotland could take its own future in hand. It has a higher mortality rate than England, and while it is less unequal than its southern neighbor, the gap between them has narrowed over the past two decades. Scots have put off dealing with these issues by putting the blame on London. Independence will deprive them of that excuse and force them to face divisions in their own society. An independent Scotland will come into its own political identity, rather than one premised just on contrasts.

And even England would benefit. Despite its being the dominant nation in the United Kingdom, the arrangement hasn’t been good for it. It doesn’t have a sense of itself as a nation to be transformed and is divided between the vibrant, youthful and pro-European big cities — especially London — and the aging, stagnating and anti-European rest of the country.

Freed from the grip of the decayed British nation and British state, England could finally be done with its delusions of grandeur. Fanciful beliefs about British importance in the world would crumble. England would be only around the eighth-largest economy in the world. And it would probably have to give up its nuclear weapons — the United Kingdom’s nuclear submarine base is in Scotland.'

This sounds like Yugoslavia all over again, but without the bloodshed, the ethnic cleansing, the hatred and the failed states that came after the killing fields.

And since in case of an attack mutual destruction is assured, they could divide everything but share the nuclear weapons.