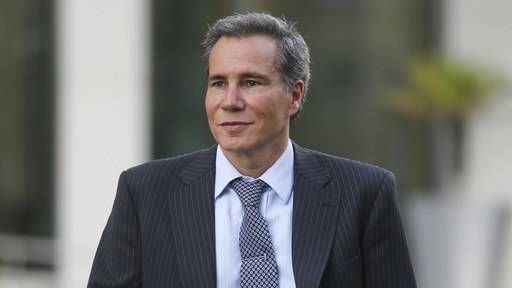 On the death of a prosecutor - Yossi Melman in Haaretz:

'Alberto Nisman died on Sunday, January 18, five years ago. The question of whether he killed himself or was murdered is still a mystery. Friends and supporters of the resolute, charismatic but controversial Argentine prosecutor have no doubt that he was murdered by Iranian agents or Argentines associated with then-President Cristina Fernandez de Kirchner, in order to silence him.
Nisman died in his apartment in a luxury high-rise in Buenos Aires, the day before he was scheduled to give a detailed account to the National Argentine Congress of his decision to charge the president with covering up terror investigations in order to appease Iran.
Nisman’s rivals, especially former Foreign Minister Hector Timerman, who died of cancer about a year ago, were equally sure that Nisman ended his own life. Timerman claimed that the prosecutor feared his own ability to stand up to the questions of Kirchner and Timerman’s supporters in Congress.'

'“Nisman: The Prosecutor, the President and the Spy” is a six-part documentary series available on Netflix this month. It tries not only to answer the question but also to tackle a twisty, complicated story brimming with conspiracy theories, international intrigue, secret bank accounts and beautiful women. It was made by the English-born, Barcelona-based director Justin Webster. The Argentine-Israeli journalist and filmmaker Shlomo Slutzky, who is deeply familiar with the entire affair, was a consultant.

The director, however, minimizes the Israeli and Jewish aspects of the story. Not that Israel is the center of the world, even if some people think that it is. But its role in the story is enormous. In March 1992 Ibrahim Hussein Berro, a young Lebanese Shi’ite Muslim acting on orders from Hezbollah and Iranian intelligence, detonated a pickup truck filled with explosives at the Israeli embassy in Buenos Aires. Twenty-nine people, including four embassy employees, were killed. Some 28 months later, Hezbollah and Iran bombed the city’s AMIA Jewish community center, using a similar method and explosives from the same source.
The 1994 attack killed 85 people, many of them Jewish, and injured 300 more.
Contrary to recent reports in Israel, Qassem Soleimani, who was killed in a U.S. drone strike in Baghdad on January 3, was not involved in the Argentina terror attacks. He was appointed head of the Revolutionary Guards’ Quds force only in 1998.
Israel’s Mossad, Unit 8200 of Military Intelligence, the Shin Bet security service and the Israel Police aided in the investigation, together with the FBI and the CIA. To Argentina’s intelligence agency, the Secretaría de Inteligencia (SIDE), their findings were indisputable: Hezbollah and Iranian intelligence were responsible for the attacks. The show’s creator failed to show even one sentence of the interview that Shabtai Shavit, the director of the Mossad from 1989-96, gave to the series.
Even though many Jews star in the series — lawyers, journalists and politicians — and argue among themselves over whether Nisman’s death was murder or suicide, Webster focuses on Argentina’s intrigue-heavy, impulse-driven politics. In the quarter-century since the Buenos Aires attacks, seven Argentinian presidents found themselves drawn into the storm surrounding the incidents and its side effects. Carlos Menem and Nestor and Cristina Kirchner, who ruled the country to 2015, bore its main brunt.'

'Alberto Nisman was born to a Jewish family in 1963. He went to a Jewish school, but Judaism did not play a major role in his life. Jewish and non-Jewish friends alike say that as a teenager he was pensive, talented and ambitious. He studied law, worked as a prosecutor and in 1997 he joined the team investigating the AMIA bombing.
In 2004 the judge who headed the investigation, Juan Jose Galeano, resigned after being accused of obstructing the investigation after it was disclosed that he, acting in concert with SIDE and with the knowledge of the head of the Jewish community, bribed a witness for the prosecution. He did so in order to implicate four corrupt police officers who were charged with selling the truck used in the attack to an Argentine citizen of Arab descent. The explosives were apparently smuggled to Argentina from Iran in the Iranian embassy’s diplomatic pouch. The police officers were acquitted. Galeano was sentenced to six years in prison.
Nisman became a key figure in the investigation from that moment. In 2003, Interpol issued a so-called Red Notice — a nonbinding request to law enforcement agencies worldwide that they locate and provisionally arrest a fugitive — for 12 Iranian diplomats, politicians and intelligence and military officials. The suspects included then-President Ali Akbar Hashemi Rafsanjani, then-intelligence minister Ali Fallahian, then-Foreign Minister Ali Akbar Salehi, the head of Iran’s atomic energy organization and Ahmad Vahidi, who later served as the country’s defense minister.
Nisman made use of the investigation conducted by Israeli intelligence, meeting with agency heads including Mossad chief Meir Dagan. He often featured in reports in the Israeli media (including an interview with me in Haaretz) and frequently traveled to the United States to consult with intelligence and administration officials. He clearly fell in love with his position and the glamor that came with it: press conferences, discussions that went on until late at night, dinners, lectures and going to exotic beaches with female friends.'

Melman concludes that it will probably never be completely clear whether Nisman committed suicide or was killed.

Clear is that those responsible for the two bombings in the 90s in Buenos Aires will escape justice.

Whether Iran after the death of Soleimani will fall back on the methods it used in the 90s is doubtful. I believe the era of these bombings is like the era of kidnappings over. It's a lot of effort, with almost no gain. Some publicity, yes. The regime in Iran may need many things but it doesn't need publicity.