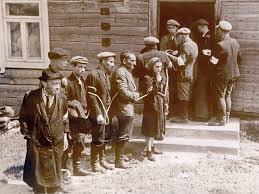 On murderers and the next time - Rivka Weinberg in NYT:

The road to Auschwitz was built by hate but it wasn’t paved with indifference. It was paved with collaboration. Anti-Semitism was entrenched in Europe for centuries before the Holocaust, supplying the Nazis with many collaborators. During the Holocaust, the local population, the police and the army often helped the Nazis. Not always, of course. There were resisters (heroes) and bystanders (ordinary people). But one thing is clear: During the Holocaust, where the local population was more anti-Semitic, they tended toward greater collaboration, resulting in a markedly higher murder rate.

To kill people living within a population, you have to be told who and where they are. You don’t just march into Poland or France from Germany and magically know who to round up and where they live. It’s even more helpful when the local police do the rounding up for you (as some did in Lithuania, France and Hungary). The correlation between local enthusiasm and the genocidal murder rate of the Holocaust is strong and stark, as Raul Hilberg and Hannah Arendt documented. In Bulgaria and Italy, where the culture wasn’t as anti-Semitic, the local populations didn’t cooperate with the murder of Jews; most Bulgarian and Italian Jews survived. Romania and Ukraine, on the other hand, had virulently anti-Semitic cultures and many Romanians and Ukrainians actively participated in murdering Jews. Few survived. Poland was also very anti-Semitic, and although there were Poles who sheltered Jews, many instead turned them in and looted their property. Some murdered Jews themselves. Very few Polish Jews survived.

The truth about how massive moral crimes occur is both unsettling and comforting. It’s unsettling to accept how many people participated in appalling moral crimes but comforting to realize that we don’t have to be heroes to avoid genocides. We just have to make sure not to help them along.

'Instead, the facts are more quotidian: Terrible things happen when people collaborate with terrible perpetrators; most people are generally helpful to the extent that their circumstances and temperament allow (unless they’ve been taught to hate); being a bystander is often morally permissible; being a hero is exceptional and instinctual (not taught); and what history teaches us is both easier and harder than the supposed dark dangers of bystanderdom. What history teaches us is: Don’t perpetrate; don’t collaborate. If you can be heroic, that is laudable. Those lessons are hard to learn, but effective and easy enough to follow to avert most vast moral crimes.

Next time the murderers come, it’s understandable if it’s too much to ask for us to risk our lives, our children, or even our jobs, to save others. Just don’t welcome the murderers, don’t help them organize the oppression or make it “less terrible” (that won’t work anyway), and don’t turn people in. That will usually be enough.'

Rivka Weinberg's historical explanations - not to say simplifications - are feeble. How does she explain that so many more Russian POWs were killed by the Germans than French, English or American POWs, or that so many more Polish citizens were killed than French citizens for example? The fact that most of the killing was done in Eastern Europe, also most of the killing of the Jews, can not be explained only based on the assumption that let's say the Polish were more antisemitic than the Dutch. For one, how does Weinberg explain that such a great percentage of Dutch Jews perished during WW II? Were the Dutch really more antisemitic than the Belgians? Maybe, maybe not.

This essay feels as if Rivka Weinberg never bothered to read anything written by people who actually lived under the occupation or in the camps.
She is absolutely right that people cannot be expected to be heroes. But talking about collaboration, wherever you look you see people practicing the art of a little bit of collaboration and it's hard to blame them. You don't need war to live in a grey zone.

The question should be: how can we prevent people being seduced by seducers who preach hate and tribalism? History and present teach us: it's hard to prevent this from happening, too many people are happily seduced by more or less charming bigots and warmongers.