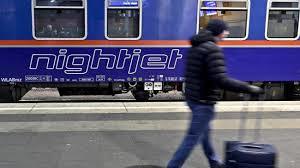 On the return of the night train - Jennifer Rankin in The Guardian:

'Night trains have returned to the tracks between Brussels and Vienna amid growing interest in alternatives to flying.

The Austrian Federal Railways (ÖBB) Nightjet from Vienna pulled into Brussels Midi station exactly on schedule at 10.55 local time on a grey, foggy morning in the Belgian capital. It is the first ÖBB night train between the two cities since 2003, as Austria’s state-railway revives its overnight network.

The revival of the Vienna to Brussels route comes after authorities in Sweden – the spiritual home of the “flight-shame” movement – announced they were also considering the launch of night trains between Malmö and other European cities.

The ÖBB, which claims the title of Europe’s largest operator of night trains, said travelling between Vienna and Brussels by train emits 10 times less CO2 than the same journey by air.'

'Austria’s state railway has been expanding its night train services, as other operators have been cutting back, finding them unprofitable. The Austrian company bought and renovated 42 sleeper trains from Deutsche Bahn in 2016, after Germany’s state operator ended its night services in 2016.

The ÖBB now runs 27 night trains, alone or with partners, serving cities in Germany, Italy and Switzerland. It plans to have a Vienna to Amsterdam route by the end of the year.

The Vienna-Brussels night train is co-run with Belgian’s state railway SNCB, which provides the locomotive and drivers on the Belgian section of the route.

Sophie Dutordoir, chief executive of Belgium’s national railway SNCB, said night trains were a superb tradition, which stopped in 2003 for economic reasons. She recalled the Ostend-Vienna Express that connected those two cities between 1984 and 1993.

Addressing EU officials and MEPs she said was glad railways were part of the EU’s green deal, a sweeping plan to transform Europe’s economy to meet the climate emergency.

But, she said, trains still had “difficulty measuring up” to air travel on price, adding that: “Financial support will be necessary as it was for high-speed lines.”'

€29.90 for an upright seat is decent, but affordable beds would be even more helpful in the fight against above all short flights.

And a bar that is open most of the night and that would offer decent food, such a bar would make the night train even more than an alternative, it would turn the night train into a destination itself.