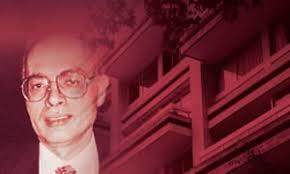 On agents, double agents, spies, handlers and whitewashing your own mistakes, Yossi Melman in Haaretz:

'Over the years, Mossad and Military Intelligence personnel, journalists and academics have published articles and books and been interviewed in the media about Marwan, the Mossad and the blunders of the Yom Kippur War.
Now, after much mulling, Dubi agreed to speak publicly for the first time, in an exclusive interview to Haaretz, and give his account of his meetings with Marwan and the secret ties he developed with him. For his personal safety, however, Dubi, who will turn 86 this year, does not want his full name to be published. For more than a quarter of a century he was Marwan’s sole handler, holding about 100 meetings with him in hotel rooms and in secured safe houses. The chief venue for their encounters, which added up to many hundreds of hours, was London, but in some cases they met in Rome, Paris and Palma de Mallorca.
Over the years, the two found a common language and came to respect one another, but Dubi never allowed himself to forget that this was not a friendship but a relationship based on vested interests. His mission was to supply information about the intentions and capabilities of Egypt, Israel’s greatest and bitterest enemy, at the time. Marwan, for his part, was driven by a range of motives: a need for money, admiration and respect for the Mossad, personal frustration and a desire for revenge.
The primary motive will probably remain an enigma. On June 27, 2007, Marwan’s body was found lying in the garden of yellow roses below his fifth-floor apartment in London. The London police found it difficult to determine unequivocally whether he committed suicide, fell from his balcony or was pushed by someone who staged the event to make it look like suicide. Former senior personnel of the Mossad and MI have no doubt that the “someone” would have been agents of Egyptian intelligence, who decided to take belated revenge for his betrayal of the homeland. Later, former Mossad chief Zvi Zamir accused Maj. Gen. Eli Zeira, former head of Military Intelligence, of direct responsibility for Marwan’s death, alleging that Zeira had acted tirelessly to get Marwan’s name made public, until that finally happened in 2002.
It had been Zeira who, as late as the morning of October 6, 1973, predicted a “low probability” of war. In the wake of the war, the special committee of inquiry headed by Supreme Court President Shimon Agranat found Zeira responsible for the intel failure leading up to the war and he was forced to resign. For the past 25 years, Zeira has been attempting to repair his reputation, in part by trying to shift responsibility for the intelligence failure onto the Mossad. To that end, he has been the chief purveyor of the theory that Ashraf Marwan was a double agent. By his logic, if the Mossad and its chief decided to work with a duplicitous player such as Marwan, then they could be blamed for Israel’s failure to anticipate the Arab attack that October day.'

'In retrospect, it turned out that some Israeli leaders, notably Defense Minister Moshe Dayan and several IDF generals, were not attentive to Marwan’s specific words, including his assertions that Egypt’s objectives in the war were very limited. Thus, on the war’s third day they panicked and spoke in terms of “the destruction of the Third Temple,” by which they meant the State of Israel itself. According to information published in the 1990s by Israeli historian Avner Cohen, Israel considered deploying its nuclear force, in case the need to use it should arise.'

'What do you think were Marwan’s motives in contacting Israel? Dubi: “I never asked about his motives. That’s the sort of question a handler doesn’t ask an agent. Naturally, the question of the motives bothered headquarters in Tel Aviv and our people in Brussels very much. They wanted very much to know why he had come to us. Intelligence personnel don’t like volunteers and are wary of them.” Still, from your long acquaintance with him, what drove him? “I agree with Goren, who said on several occasions that he wanted money and lots of it. There were other things, too. The Mossad had a very strong image after 1967. He admired the Mossad. In my opinion, Nasser, who had struck fear into Marwan, was very much weakened after the Six-Day War, partly because of his illness. Marwan apparently lost his fear of Nasser and wanted to take revenge on him [for his hostility toward him, for not taking him seriously and for his efforts to break up his marriage]. That’s apparently another reason that he tried to contact us originally, when Nasser was still alive. Nasser disdained him and held him in low esteem.” Sadat, in contrast, “admired Marwan,” Dubi says. “He promoted him and made him his confidant.” The president’s appreciation of him was bolstered in the winter of 1971 when Sami Sharaf and other leading Nasserists tried to depose Sadat.
“They brought in Marwan, who quickly reported to Sadat about it,” he adds. “Thanks to the information provided by Marwan, Sadat blocked his opponents and made him his trusted special adviser.” Nevertheless, “The fact that Sadat drew him close did not alter Marwan’s contempt for him or the ridicule he heaped on his wife, Jehan, and their children. Marwan told me a few times before the war that Sadat was hesitant and found it hard to make decisions.” According to Dubi, another reason for Marwan’s anger at Sadat was that at a certain stage, he started to give him tasks such as escorting his wife and daughters on shopping expeditions in Cairo and abroad – something like the family butler.
Hence, his relationship with the Mossad. Naturally, he didn’t provide his valuable information for free, to put it mildly. He said he needed the large sums of money he asked for because he had to look after himself, ensure his safety. “He talked to me about his security,” Dubi recalls, “if he were to be caught and be unable to return to Egypt, or if he came under suspicion. I replied with a question – ‘How much do you think it should be?’ – and his response was: ‘I leave it to you.’” At first it was decided to pay Marwan only a few thousand dollars each time he provided information, but that riled him. “I’m giving you such good material and this is what you’re giving me? I want 20,000,” Dubi recalls Marwan saying. Goren and other senior Mossad figures vehemently objected: Such a sum was unprecedented; no agent had ever received that much money. In today’s terms, the amount quoted by Marwan would be the equivalent of more than $100,000.
“I recommended acceding to his request, based on the understanding that this would be a long-term relationship and it would be a worthwhile investment that would bear fruit, and we should not bargain with him,” Dubi explains. His recommendation was accepted by Zamir. The payments, which increased over time, were almost always in cash (only once was money deposited in a bank account). Mossad headquarters prepared the banknotes and, like in the movies, placed them in Samsonite suitcases, which were sent to Dubi, who passed them on to Marwan.
“He never counted the money, except for one time,” Dubi adds drily, recalling an amusing incident during one of their meetings. “A suitcase arrived with a relatively large sum, maybe 50,000 in pounds and dollars. Surprisingly, Marwan said to me, ‘Let’s see.’ I opened the suitcase and we saw the money stacked in rows of bundles. Very nice, Marwan said – but then he couldn’t shut the suitcase. I sat on it, and together with him we pushed and pushed until we got it shut.” Goren and Dubi estimate that over the years Marwan was paid close to a million dollars, in today’s terms.'

'Aside from Dubi, the person from the agency who spent the most time with Marwan was Zamir, who met with him six or seven times. Zamir explained that he asked to participate in meetings in order to get to know his ace agent better, even though he admitted that it was quite rare for a Mossad chief to come to meetings with his agents. “On the other hand,” Dubi emphasized, “the fact that the Mossad chief in person took the trouble to meet with him flattered Marwan and strengthened the ties with him.” Zamir went so far as to say that he considered himself “Marwan’s friend.” Goren thinks otherwise – that Zamir wasn’t serious and also that it was in any case wrong for him to feel that way. “Agents, even the most important of them, are not friends and should not be friends of the Mossad head.” Zamir retired from the Mossad in 1974. His successor, Yitzhak Hofi, also decided to meet with Marwan – once, in Dubi’s presence. Over the years, no few people in the Mossad coveted Dubi’s assignment and wanted to replace him. “Case officers envied me,” he says.
On three occasions Goren, Zamir, Hofi and Danny Yatom (the Mossad chief during the second half of the 1990s) tried to appoint a new handler for Marwan. And each time they failed. In one case, Marwan didn’t like the Iraqi origins of the intended agency replacement. In another case, a Mossad operative of Anglo-Saxon descent was sent to him, but he too was unable to win over the Egyptian agent.'

'Dubi hopes that the present interview will refute once and for all “Zeira’s lies,” as he puts it. “He was the most important spy we had, and the information he provided was intended to contribute to Israel’s security,” Dubi says. “Unfortunately, at the most important moment, in the Yom Kippur War, Israel failed because it did not heed the warnings he provided.” A cornerstone of the double-agent theory has to do with Marwan’s modes of moving around. In all his many trips abroad, on business, for diplomatic meetings and for meetings with Mossad personnel, the agent carried an Egyptian diplomatic passport. In one case, he was driven to a meeting by a driver from the Egyptian embassy in London, in a car that bore diplomatic license plates. Marwan got off a few streets from the venue and the driver went on his way. Afterward, Zvi Malhin, who founded the Mossad’s Keshet division, which is in charge of surveillance, and as such was also responsible for securing one of the meetings with Marwan, claimed that this attested to his being a double agent. Dubi, Zamir, Goren and others see Marwan’s behavior as proving precisely that he was not a double agent. “If he had been a double agent whose loyalty was to Egypt, he would have been cautious about every indication, such as an embassy driver, that could make Israel suspicious of him.”'

Two things are standing out in this story. The casualty with which a former head of military intelligence discloses information about a spy in order to cover up for his own failures, and the larger question, why someone would like to become a spy? It's not only the money, as this story shows, it's a combination of things, revenge, the desire to be someone, probably also the adventure, a certain lust for recklessness.