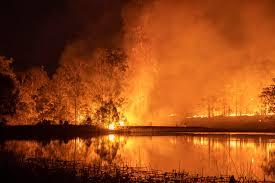 'DER SPIEGEL: How do you explain the extraordinary severity of such fires?

Pyne: For more than a year, Australia has been suffering a severe drought, and has recently experienced record temperatures. This facilitates both kinds of fires: the nasty-explosive ones and the permanent-inextinguishable ones.

DER SPIEGEL: Whose fault is it? Arsonists? Climate change? Mismanagement?

Pyne: If it was only that simple! Some people are using the fires to strengthen their climate change agenda, others prefer to blame arson. This helps distract from systemic problems. It’s about climate change, but also the way people live in such landscapes. About their power supply, their agriculture, their settlements ...

DER SPIEGEL: That means that these fires could have been prevented?

Pyne: Prevented, no. Altered, yes. The controversy is how to affect the bad fires in smart ways. Australia has a long-standing debate about how much deliberate burning people should do to reduce fuels, but also to promote ecological integrity, and more recently for cultural reasons. There are, of course, people who see no reason for fire. The whole subject remains controversial. After World War II, Australian foresters switched to a strategy of large-scale, prescribed burning. But then, unfortunately, controlled burning fell into disrepute.'

'DER SPIEGEL: You said earlier that Australia is a continent of fire. What did you mean by that?

Pyne: Australia has been exposed to fires for millions of years, and its flora and fauna is well adapted to them.

DER SPIEGEL: What kind of adaptations?

Pyne: Oh, there are plenty. There are shrubs that seal their seeds with wax – which then melts in fire so that the seeds fall into a freshly prepared ash bed. The only documented case of a non-human species using fire also comes from Australia. Raptors in northern Australia have been seen picking up burning branches to set fires elsewhere to expose their prey.

DER SPIEGEL: The ongoing rescue operations for koalas raise some doubts that they are well adapted to fire.

Pyne: Koalas normally live in the treetops, where they can survive fires spreading on the ground. But it's true: They are unfit for intensive fires that reach all the way up into the treetops and spread over vast areas.

DER SPIEGEL: Some environmentalists fear that some species could go extinct as a result of the fires.

Pyne: It's too early to know for sure. The numbers you hear are staggering, but are they true? It may be many weeks before the smoke clears enough to find out for sure.'

'DER SPIEGEL: In your "biography" of fire, the natural and the anthropogenic fire are followed by a "third fire." What do you mean by this?

Pyne: That’s the industrial fire. Natural and anthropogenic fires have in common that they burn in a common, living landscape. Both fit into an ecological framework. But when you start burning fossil fuels, there are no limits. Industry creates fires that burn day and night, in summer and in winter, rain or shine. Combustion in an engine, in a power station or in a blast furnace is free of any biological context. It has no ecological boundaries.

DER SPIEGEL: So, step by step, the "second fire" [fire as companion AG] is disappearing from our world and being replaced by the "third fire"?

Pyne: That’s right. Let me give you an example: When I was young, we used to burn our lawn in Phoenix on a regular basis. It took five minutes, no big deal, all our neighbors did the same. Today, doing so is forbidden. I rent a dethatching machine, which I have to pick up in a fossil-fueled car and fill it with gasoline so that it collects all the dry grass that we would otherwise just have torched. I then fill this dry grass into plastic bags, which are picked up by a fossil-fueled garbage truck and delivered to the landfill, where it decomposes to methane. So direct burning is forbidden, while burning all the many fuels on the way to disposal is OK. Isn't that perverse?'

Mr. Pyne has many valuable things to say, and he is so right to point out that the perverse side effects of the actions we undertake, the laws we establish in order to prevent damage and destruction, may cause more damage than we realize. This is what I would call the action-bias, the widespread belief that action is always better than inaction, it depends on the action, and sometimes inaction is more fruitful.

And for more on fire I recommend this book by J. Goudsblom.