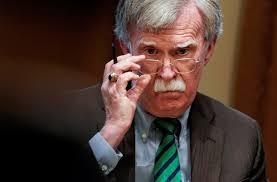 'Quid. Pro. Quo.
We knew that already. But Bolton’s testimony would make that devastating conclusion inescapable, even to Republican senators who have striven mightily to blind themselves to the obvious.
Bolton, who has already announced that he would comply with a Senate trial subpoena, actually wants to testify, it seems. He wants to testify “for several reasons,” says the Times. “He believes he has relevant information.” (Gee, do you think?) He’s also rightly worried he’ll get trashed if he doesn’t testify and his explosive account comes out only later for $32.50 on Amazon. (One hopes he’d like to do it for the sake of the country, too.)
No wonder Trump’s lawyers so vehemently opposed Bolton’s being subpoenaed last week. No wonder they’ve been plotting with Senate Republicans to make sure that, if Bolton does testify, he does so in secret. No wonder Trump himself expressed concern last week about the possibility of Bolton testifying. No wonder why, on Saturday, none of the president’s lawyers dared even utter the word “Bolton.” And no wonder that, just after midnight Monday, a few hours after the Times story came out, Trump tweeted a flat (but unsworn) denial of Bolton’s account: “I NEVER told John Bolton that the aid to Ukraine was tied to investigations into Democrats, including the Bidens. … If John Bolton said this, it was only to sell a book.” From Trump on down, they all know how damning Bolton’s testimony would be to Trump’s defense. Indeed, the leak of what’s in Bolton’s book shows how disingenuous the president’s defense has been.
Before the Senate on Saturday, deputy White House counsel Michael Purpura laid out the elements of that defense. Key among them: “Not a single witness testified that the President himself said there was any connection between any investigations and security assistance, a Presidential meeting, or anything else.”'

I'm doubtful whether Mr. Bolton's testimony - if he will testify that is - will convince Republican Senators to vote against their President. They didn't do so in the past, they won't do so in a few weeks from now.

On the other hand, Mr. Bolton, the warmonger, the big fan of regime change in Iraq and Iran, but preferably not in Saudi-Arabia, as the hope of the Democrats is a slight sign of desperation. But of course we always need snitches and former friends who feel betrayed by their ex-bosses and ex-wives and ex-lovers to win a fight or to come a bit closer to winning the fight, especially in politics, especially in American politics.
The weakest point of POTUS is his talent for making unnecessary enemies. Maybe this hubris will undo him in the end, maybe.