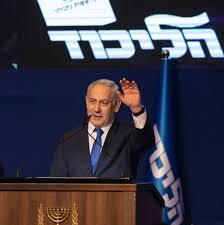 In case you forgot it, Anshel Pfeffer on the Israeli elections:

'Benny Gantz’s party may have slipped to second place in this election, but it still did well for an artificial party that came out of nowhere just a year ago. Kahol Lavan added 66,000 voters, climbing to 26.59 from 25.95 percent of the vote.
The only problem is that it lost a large chunk of voters to Likud and made up for them by taking an even larger chunk from its rival and potential coalition ally Labor-Gesher-Meretz to the left. In the process, Netanyahu’s coalition grew.
The map of Kahol Lavan’s strongholds confirms what we already saw in 2019. If it still needs to be said, Kahol Lavan is the new Labor: a centrist party with strong security credentials capable of attracting the widest swath of voters – from the soft right to left-wingers who prefer to vote for the only viable alternative to Likud.
There are two ways of looking at Kahol Lavan’s result over the past three elections. On the one hand, no new Israeli centrist party has done so well three times. They always imploded after their first or second election. On the other hand, the last three elections have taken place over 11 months, so they’re hardly comparable to anything that happened before.
Cynicism and inflated expectations aside, Kahol Lavan has done better than anyone could have realistically expected when the party came into being in February 2019. Save for the defection of one low-ranking MK, it has kept together and won more than 30 Knesset seats each time. If it was facing any Likud leader but the master strategist Netanyahu, and if its allies to the left weren’t so weak, Gantz would already be prime minister.
Kahol Lavan could still implode. It doesn’t have any traditions holding it together, and the fierce egos of the four members in its cockpit can still tear the party apart. Its survival depends largely on how Gantz & Co. navigate the next few months and whether it will finally be in government. If Netanyahu somehow forms a governing coalition, Kahol Lavan is likely to wither in the wilderness of opposition. But if somehow Netanyahu is sent packing and Gantz makes it to Balfour Street, Kahol Lavan conceivably has a future as one of Israel’s two main parties.'

'Labor-Gesher-Meretz If you want to compress the political history of Israel’s last generation into one statistic, compare the combined vote of Labor and Meretz in 1992, when Yitzhak Rabin won the election, with that of the Labor-Gesher-Meretz slate this week.
Twenty-eight years ago, Labor and Meretz won 45 percent of the vote, or 56 seats. This election, running together, they came in at just under 6 percent and seven seats, down from the 11 seats the two separate lists of Labor-Gesher and Meretz (or Democratic Union, as it was called in September) won last time.
Some will argue that this loss, the largest suffered by any of the parties in this election, proves that merging the slates was a mistake, but the historical trend proves otherwise. If they hadn’t joined forces, one or both of the parties could have fallen beneath the electoral threshold and passed into political oblivion. Not that their survival makes for a pretty picture.
The parties of the Zionist center-left, heirs of the socialist founders and builders of the state, have “ended their historical role,” as Amos Oz said of Labor back in 2008. That much is clear. Nearly 40 percent of Israelis who voted for them less than three decades ago have found new political homes.
For the centrist majority, this is, for now, Kahol Lavan. For the not inconsiderable number of Arab Israelis who once voted for Labor or Meretz, the Joint List is the current address (at least until Labor and Meretz or their successors once again put Arab candidates in prominent positions on their tickets). And of course there is the demographic and ideological shift toward the right.
The last two Labor prime ministers, Yitzhak Rabin and Ehud Barak, staked their political future (in Rabin’s case also his life) on peace with the Palestinians. The failure of the peace process and the second intifada destroyed Labor’s credibility, and none of its subsequent leaders have managed to articulate a new vision. Amir Peretz’s attempt to reincarnate Labor as a “social” party attracting Mizrahi voters from the country’s outskirts has now failed three times (in 2006, 2019 and now) and linking up with the former Likud princess Orli Levi-Abekasis and her Gesher splinter party hasn’t helped either.
And Meretz has suffered, partly as collateral damage from the failure of the peace process, but largely due to its inability to evolve from a party for young Tel Avivians to a broader liberal platform reaching other parts of the country. The party is still drawing voters in its old strongholds in and around Tel Aviv and on the kibbutzim, but even there it was beaten resoundingly by Kahol Lavan, and these communities now represent a shrinking proportion of Israel anyway.
It’s hard to imagine a future with Labor and Meretz keeping their old names and leaders – certainly not if Kahol Lavan remains the main centrist party. The old Zionist left is still waiting for leaders with a vision of how to make it relevant in the 21st century – if such a vision even exists.'

Read the in Haaretz here.

Let's get this straight, except for the Joint List, which is mainly backed by the Arab community, there is no left in Israel, because there's no peace process and there is hardly anybody who is willing to believe in a peace process.
All you can believe in in The Middle East, and sometimes elsewhere as well, is the status quo and God.
(Love on an individual level maybe.)

In the meantime, what comes after Netanyahu remains the big question, of course Anshel Pfeffer has no answer to that.

We know that being indicted doesn't matter that much, if the electorate believes in you because you personify the status quo, and what else is there to believe in, the electorate will vote for you.