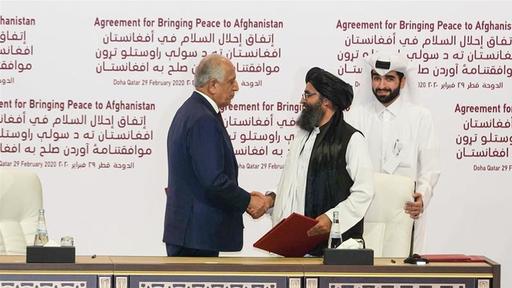 'Zalmay Khalilzad is negotiating with the Taliban on behalf of the U.S.'

'DER SPIEGEL: As the special representative of U.S. President Donald Trump, you signed an agreement with the Taliban in late February. What did you achieve?

Khalilzad: We achieved several United States objectives: First, the Taliban have made commitments that they were not prepared to make before. These include a break with al-Qaida; not to host or support any terrorist groups that would threaten the security of the United States and its allies; and reducing violence. And that they will sit down with a national and inclusive Afghan negotiating team to chart a future political roadmap for their country together and finalize a comprehensive and permanent ceasefire.'

'DER SPIEGEL: There have been recent reports from several regions of Afghanistan, such as Helmand, that violence between government troops and the Taliban hasn't abated at all since the signing of the agreement, and has even increased.

Khalilzad: We agree that the level of violence is too high. There are currently no attacks against the coalition forces, the level of violence in the cities is relatively low and the major highways are not blocked. But still, there is too much violence. We are pushing for further reduction of violence. Everything is a process. We are right in the middle of it, and whether or not this process will ultimately succeed, history will judge.

DER SPIEGEL: There are rumors about secret annexes in the U.S. treaty with the Taliban that allegedly grant the Taliban a say in the whereabouts of military bases and reconnaissance equipment once a unity government has been formed. Is that so?

Khalilzad: There are no secret annexes. There is a classified document that deals with the implementation of the withdrawal, for example the order in which the U.S. bases will close. A second document, which is also not public, deals with the implementation of the Taliban’s commitment on counterterrorism and how they will be measured. U.S. Secretary of State Mike Pompeo has agreed to share all documents with Congress. President Ashraf Ghani and Dr. Abdullah have also reviewed all the documents, in three languages.

DER SPIEGEL: Will U.S. troops end up staying in Afghanistan or not?

Khalilzad: We committed to implementing our agreement on a phased and condition-based withdrawal of our forces.'

' DER SPIEGEL: You are married to a committed feminist and came to Kabul many years ago as ambassador to build a modern country. How frustrated were you when you ended up having to negotiate with the radical Islamist Taliban after all?

Khalilzad: Of course, I would have liked to have seen more progress on the political process. But Afghanistan has also made a lot of strides. I am hopeful a successful peace process will improve the future of this country, politically, economically and socially.

DER SPIEGEL: What does that mean in practice?

Khalilzad: It is perfectly legitimate for certain groups to want the "X" system, and for another group to want the "Y" system. But it must be a system that allows the coexistence of both groups. Violence cannot be the arbiter of political disagreement.'

'Since 2001, more than 2,200 American troops have been killed in Afghanistan, along with hundreds from allied countries that have contributed forces to the war. Since 2014, after the Pentagon officially and euphemistically ended “combat operations,” putting the Afghan military in the lead, more than 50,000 Afghan security forces have died. And the military effort has cost the United States more than $1 trillion.

Of the $133 billion that the United States has spent on reconstruction programs in Afghanistan, about $83 billion went toward training the Afghan Army and police forces, according to the inspector general.'

The results are meager, of course the results were meager when the US left Saigon, but all that the Taliban promises is this: not to threaten US security, whatever that means. After such a costly war, both in terms of money and in terms of lives - ten thousands of Afghans, civilians and fighters, got killed - this is slightly disappointing.

The end of The Global War on Terrorism is here, George W. has officially become a footnote. I'm afraid that nations will now start fighting their own citizens under another guise. The new enemies of the state will be called enemies of national health.