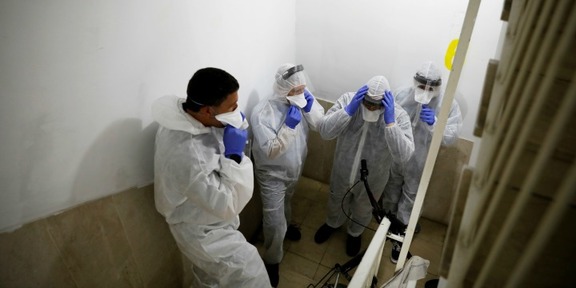 On supervision and the state - Ronny Lidner in Haaretz:

'Meanwhile, Guy’s fever went down and he felt totally fine. But the results of the coronavirus test were delayed. When they finally arrived, six days after the fact, it turned out he did have the virus. But no less interesting than that, all the people he had merely been in remote contact with – including Shira, the upstairs neighbors, the people who came to visit the upstairs neighbors and Guy’s parents – received a message from the Shin Bet security service saying they had been exposed to the coronavirus and had to go into isolation.

The message was very vague and revealed almost no details about their intersection with a coronavirus carrier, save for a date. “Hello Shira, according to an epidemiological investigation, on March 16 you were in the vicinity of a coronavirus patient. You must immediately go into isolation until March 30,” the message read, and that was all.
“The message had a date but no location, hour or patient number,” Shira said. “No hint that might have helped me know what kind of contact they meant. I was also in isolation for all those days except for that morning, because I had gone to live with my elderly parents and I self-quarantined,” Shira said. “That, and the fact that anyone who went by Guy’s house during the time he was in isolation and did not have contact with him still received the message, raises suspicions that the geolocation missed by a lot and sent us into isolation for no reason.” Shira had called the Health ministry to clarify what kind of contact she had with a known carrier. “First of all, I was really alarmed when I got the message, because I’m now living with my parents and they’re in their 70s. I called the Health Ministry hotline but there’s no one to talk to there. They explained that they’re not responsible for geolocation and they couldn’t give me any details, and it’s not like there’s a Shin Bet phone number I can call and get answers. It’s a feeling of complete helplessness,” Shira said.

Another account Haaretz received of the tracking measures missing the mark is the Kafkaesque story of Dr. Itamar Zilberman, a gynecologist from Tel Aviv. Last week he felt under the weather, and because he treats many pregnant women, who are at a high risk of developing complications from the coronavirus, requested to be tested as not to infect countless others. After being swabbed, he was sent into a 48-hour quarantine until he got his results.
The test came back negative, to his great pleasure. But there seemed to be a mix-up along the way: The Health Ministry accidentally received information that he tested positive, and transferred the data to the Shin Bet, who immediately began the geolocation of those who had contact with Zilberman. He received a text message to that effect on Friday.
He and his partner tried to get in touch with anyone they could to warn them, but with no success. His medical colleagues, neighbors and acquaintances began receiving the Shin Bet messages on Saturday. None of Zilberman’s medical contacts could help him end their unnecessary isolation. “Now the absurd situation is that everyone is in quarantine and I’m working as usual, because my test came out negative. So I’m trying to cancel all of their quarantines,” he said.'

'In recent weeks a large Health Ministry team has been working with an outside firm on an app that will make the epidemiological investigation much more transparent, and maintain the privacy of the public. If as many people as possible download the app, it can share information about proximity to confirmed coronavirus patients, but anonymously, and without conveying the information to the Health Ministry, the police or the Shin Bet.
An app just like this was launched a few days ago by the government of Singapore. The obvious question is why Israel decided to bring out the big guns of enforced public surveillance on the outset, rather than seek the possibility of a proportionate, specially-designed civilian app.
The Health Ministry has not responded to this report.'

Remember, the no-fly-list after 9/11? Well, how many people were on it? And probably, most of the people on the list deserved to be on it.

Soon we will have the don't-leave-your-house-list, or the stay-in-your-room-list.
Some people are looking forward to these lists.
Sartre already knew, freedom is unbearable, and we applaud all the measurements that relieve us from this unbearable weight.

In a while the secret service will send you a message: "You have now twenty minutes to go out and buy your yoghurt and your müsli and your cappuccino with almond milk. Don't talk to strangers. Keep your mouth shut. Don't be a threat to society."

Many people will love it. They will praise the efficiency of the new system.