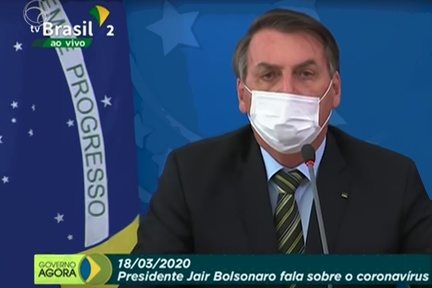 On wannabe-dictators and denial - Tom Phillips in The Guardian:

'Brazil’s far-right president, Jair Bolsonaro, has accused his political foes and the press of purposefully “tricking” citizens about the dangers of coronavirus, as Latin America braced for a spike in the number of deaths.

The pandemic has claimed nearly 15,000 lives across the globe and looks set to exact a deadly toll on Latin America in the coming weeks, with many regional governments closing borders and shutting down major cities in a desperate bid to limit the damage.

But Bolsonaro has resisted such drastic measures, dismissing media “hysteria” over coronavirus and calling the illness “a little flu”.

In a tetchy television interview on Sunday night Bolsonaro again downplayed the pandemic and attacked the governors of key states including Rio de Janeiro and São Paulo who have ordered residents to stay at home and are imposing quarantines.'

'In a column published last December Cantanhêde declared Bolsonaro not just the overwhelming favourite for the 2022 election, but “unbeatable”.

Now, she believes his reaction to coronavirus has shredded those hopes.

“I think he’s fatally wounded for the election [in 2022] … If the election was held today there is a big chance Bolsonaro would be defeated,” Cantanhêde said. “This was a watershed moment.”'

I hope so, but even wannabe-dictators can declare martial law. And 2022 is far away, but history taught us that some dictators last longer than two years.