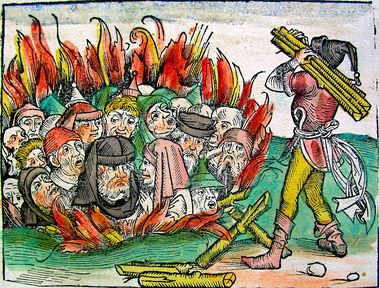 On foreign attackers and other scapegoats - Ian Buruma in NYT:

'President Trump and some of his allies have made a point of calling the coronavirus a “Chinese virus,” the “Wuhan virus” or, simply, a “foreign virus.” Senator Tom Cotton of Arkansas even suggested the Chinese had devised the virus as a biological weapon. They would like us to believe that the disease is like a foreign invasion, an alien attack on the people of the United States.

This type of rhetoric taps into ancient and primitive fears. When the plague, or Black Death, devastated the peoples of Europe in the 14th century, Jews, foreigners and lepers were widely blamed for it.

Such nonsense often had deadly consequences, as minorities fell victim to popular rage. But there are indeed cases where foreign invasions infect populations with diseases, as happened when Europeans brought smallpox, cholera and typhus to Native Americans, who had no immunity to them. This history lends a sinister irony to the current whiffs of xenophobia emanating from the White House.'

'The mass murder that resulted was instigated by Germans. But there were plenty of scientists in other countries, including the United States, who believed that public health should be improved by eugenics — for example, by sterilizing people thought to be defective in one way or another. Eugenicists want to rid the world of people deemed physically or mentally inferior. But the same kind of thinking can be applied to political enemies.

In the Soviet Union, politics was medicalized by treating people who criticized the Communist government as mentally sick. The Marxist-Leninist system, after all, was supposed to be rational and scientifically sound. This meant that a person had to be insane to dissent, and he or he was therefore only fit to be locked up in an institution for the mentally ill.

Things have not gone this far in democratic countries like the United States. But there is a tendency, not least in the White House, to speak in Darwinian terms about sacrificing the old and sick in the current crisis for the sake of the economy. Worse still is Mr. Trump’s habit of dismissing his skeptics, critics and political opponents not only as “nasty” but also as “sick.” Democrats, Mr. Trump said at a rally last year, were “sick people.” Sickness precludes legitimate differences of opinion and reasonable debate, without which democracy cannot exist. Sick people must be excluded for the sake of public health.

This is why the idea of a virus as a foreign attacker is so dangerous. Even though Mr. Trump, no doubt on good advice, has now said that Asian-Americans are not to blame for the presence of the coronavirus, citizens assumed to be of Asian origin have already been attacked — sometimes physically — by people who took Mr. Trump’s words about a “Chinese virus” literally, as though Covid-19 were a Chinese attack on Americans.

A leader who applies chauvinism and prejudice to a frightening disease is not best equipped to deal with a pandemic. Nationalism should have no place in medical discourse. And medical language should never be applied to politics.'

Nationalism should not have a place in medical discourse, but unfortunately it has. in Europe, even though Germany has taken in Italian, French and Dutch patients, the EU has been largely absent in the discourse about the virus. Nationalism is present in popular conspiracy theories - the virus was created in a lab by a "secret service" - the next step of course is an us against them. It's present in the lack of financial solidarity among the European states, the usual suspects are to blame I'm afraid.

Finally, mankind has a common enemy, but humans rather fight each other and blame each other. The need to declare other humans subhumans is once again more vehement than the question how to deal with a common threat in such a way that democracies and societies are not damaged more than absolutely needed.