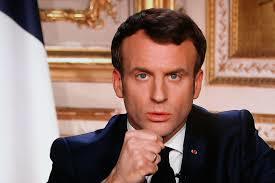 'Eurobonds, German Chancellor Angela Merkel assured eight years ago at the height of the euro crisis, will not exist "for as long as I live." Last week, during a video summit of European Union leaders, southern EU member states were again brushed off just as brusquely when the idea of eurobonds was once again raised as a way of shielding their economies from the impact of the corona pandemic. German Economics Minister Peter Altmaier spoke disparagingly of a "phantom debate."

Either Germany’s leaders do not grasp what they are so carelessly dismissing. Or they are choosing not to grasp it out of fear that the right-wing populist Alternative for Germany (AfD) might exploit aid for European neighbors for its propaganda. Ultimately, it was the bitter debate over aid for Greece during the euro crisis that led to the AfD’s founding in 2013.'

'If Italy, Spain and France are forced to set up economic bailout programs and guarantees for their paralyzed economies that are as generous as those adopted by Germany, trillions rather than billions would be required. And if the Europeans don’t immediately signal that they are working together to counter this crisis, it will be a feast for populists, for enemies of the EU and for hedge funds in London and New York. Just like when Greece teetered at the edge of the abyss during the euro and debt crisis, they would bet on the entire eurozone going bust. And this time they would win.

Countries like Italy or Spain are too large to be rescued with existing instruments like the the European Stability Mechanism (ESM), the eurozone's bailout fund. The 410 billion euros in the fund wouldn’t even be enough to cover Italy. In addition, the conditions tied to ESM relief wouldn’t make sense in the event of a shock as massive as the one created by the coronavirus crisis.'

'It would be more honest and efficient to go along with the recent French proposal, which even skeptics of eurobonds have since come to like: corona bonds. These European government bonds would have a limited duration and would be linked to the very specific purpose of coping with the pandemic. They would send a strong signal to the financial markets, but also to the people of Europe. They would provide proof that we have not abandoned each other in this time of great need, that Europe is more than an alliance of egomaniacs and more than just a well-oiled, but cold-hearted single market that (still) has a common currency. And on top of that, corona bonds would also be a bomb-proof investment that would finally yield interest again. Just not for the hedge funds.'

The corona bonds, a bomb-proof investment. Finally some good news with the word 'corona' in it, one could say.

Whether the corona bonds mean - if they come into existence - that we haven't abandoned each other remains to be seen. I would say the corona bonds at best mean that the European leaders are not ready for the great crash that the dissolution of the euro and the EU is going to be.