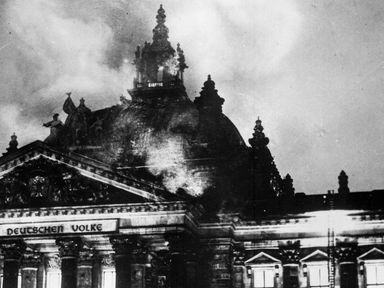 On language and the Reichstag-fire moment - Andrew Marantz in The New Yorker:

'In 2018, Jason Stanley, a philosophy professor at Yale, published “How Fascism Works.” Although it was a slim volume, it ranged broadly, citing experimental psychology, legal theory, and neo-Nazi blogs; although it was by an academic philosopher, it was a popular book that prioritized current events over syllogisms. Viktor Orbán is mentioned more times in the book than Hannah Arendt. Donald Trump shows up dozens of times, and he is portrayed not as a distractible bozo but as a concerted aspiring strongman. “Fascist politics can dehumanize minority groups even when an explicitly fascist state does not arise,” Stanley writes. Elsewhere, in a chapter called “Sodom and Gomorrah,” he argues that Trump’s habit of extolling the heartland while decrying urban squalor “makes sense in the context of a more general fascist politics, in which cities are seen as centers of disease and pestilence.” Stanley couldn’t have known that many American cities were, in fact, about to become centers of disease, but he could have predicted that Trump would use such a development to his rhetorical advantage. “Some people would like to see New York quarantined because it’s a hot spot,” Trump said, late last month. “Heavily infected.”

Stanley isn’t, or isn’t mainly, a scholar of public policy; he is a philosopher of language. When he insinuates that Trump is a fascist—and you don’t have to be a philosopher of language to catch the insinuation—he means that Trump talks like a fascist, not necessarily that he governs like one. Still, many passages in Stanley’s book begin with a discussion of Germany in the nineteen-thirties, or Rwanda in the nineteen-nineties, before pivoting to a depiction of the contemporary United States. “Ever since my book came out, I’ve been fighting with critics who go, ‘You’re overreacting, you’re exaggerating, it’s irresponsible to call this fascism or that fascism,’ ” Stanley said. “I’ll point to a step Trump has taken—he’s using ice to round up children, he’s surrounding himself with loyalists and generals, he’s using the apparatus of government to dig up dirt on a political rival—and the response is always ‘Sure, that’s bad, but it’s not a big enough step to justify the F-word.’ I’m starting to feel like the it’s-not-a-big-enough-step people won’t be happy until they’re in concentration camps.”'

'He also acknowledges, of course, that there are plenty of big steps that Trump hasn’t taken, and may never take: imposing martial law, closing the borders, indefinitely postponing the 2020 Presidential election. Still, if Trump were ever going to be tempted to try something like this, wouldn’t now be the time? “A lot of us who were deeply worried about Trump from the beginning were specifically worried about what would happen when he got his Reichstag-fire moment,” Stanley said. (The Reichstag, a government building in Berlin, was set ablaze in an arson attack, in 1933; Hitler’s government blamed the arson, falsely, on Communist agitators, and used it as a pretext to suspend civil liberties.) “Trump is lucky, in a way, because the coronavirus is a real crisis,” Stanley continued. “He didn’t have to manufacture one. And now he’s acting the way strongmen always act in a time of crisis—grandstanding, hogging the media spotlight, demanding obedience. So far, at least, his approval rating seems to have held fairly steady.”'

'On Wednesday, the Treasury announced that, in an unprecedented move, stimulus checks would bear the President’s name, and Trump threatened to force Congress into adjournment, which no President has ever done. “When somebody’s the President of the United States, the authority is total,” Trump said at a recent press conference. “It’s total.”

Stanley has not rewritten his syllabus in light of covid-19. Even so, his students can’t help drawing connections between what they see on the news and what they read in class—“The Origins of Totalitarianism,” by Hannah Arendt; “Conspiracy Theories,” a recent book by the philosopher Quassim Cassam; and, naturally, Stanley’s own “How Fascism Works.” On a recent Thursday afternoon, Stanley and a few of his students gathered (virtually, of course) to discuss overtly what they’d all been weighing privately: How does what we’re discussing in class bear on our present, and on our near future?'

The F-word might not always illuminate things. Whether the president uses theatrical strategies that can be labeled fascist and when exactly we could label him fascist without do 'injustice' to the fascists of the last century - by all means this word has been abused a lot - is theoretically interesting, but it doesn't lead to more knowledge, it doesn't give us better tools with which to fight this danger.

This virus might be the Reichtstag-fire moment, not only for Trump. And postponing the elections might be a clear sign that we passed the Reichtstag-fire moment once again, but would it be reason enough to pack my suitcases? You don't want to pack them too early. And then, where do we go to? Berlin probably, oh irony.
I'm betting on the structure and the nature of the American state, the lack of a central power, the lack of centralization, a lust for anarchy, that makes it difficult for fascism to really thrive here.